As the situation in Israel continues to escalate, our work here in Canada grows in importance. We are interested in your input on Israel engagement here in Canada. NIFC is currently reimagining our approach to organizing and outreach in the Canadian 20s and 30s community. Our goals for the town hall are to: • Hear […]

Due to COVID-19 precautions, this event has been postponed until June. Join us at the 20s/30s Social Justice Shabbat Dinner featuring activist and refugee, Dawit Demoz. Hear about Dawit’s journey from Eritrea to asylum seeker in Israel to his current life here in Canada after being sponsored by a group of young Canadian Jews. Friday, […] 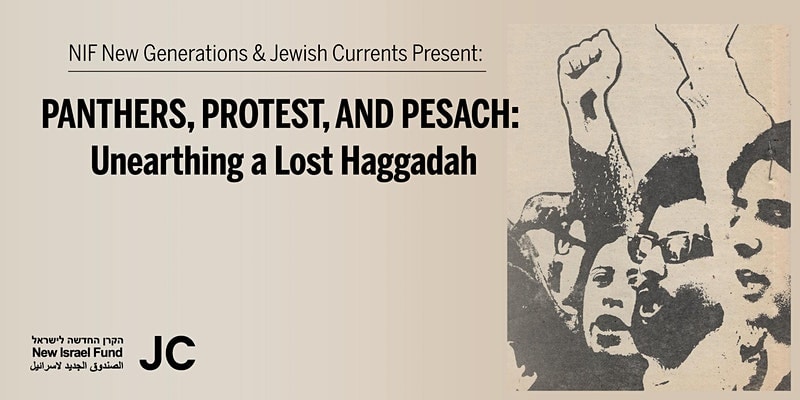 Join Jewish Currents and the New Israel Fund (NIF) New Generations for a Passover conversation about a too-often forgotten piece of Israeli history. The Israeli Black Panthers movement was founded in 1971 in the Musrara neighborhood in Jerusalem by mostly Morrocan immigrant activists who drew inspiration from the American Black Power movement as they protested […] 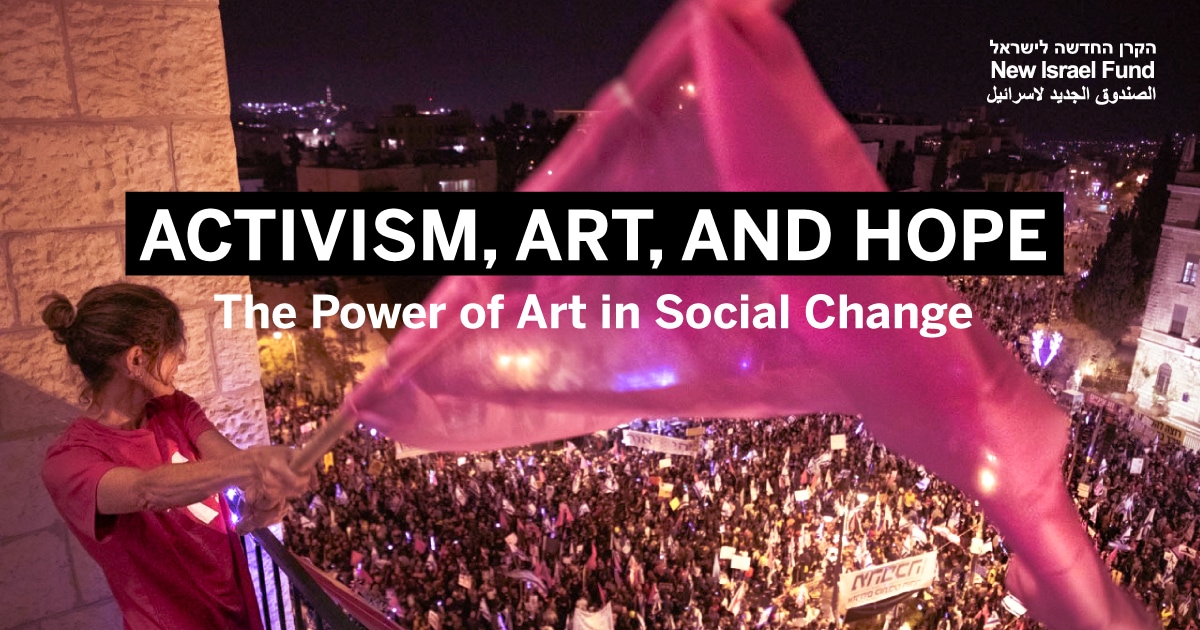 New Israel Fund of Canada New Generations, in partnership with New Israel Fund New Generations Art is a powerful tool for social change and a crucial part of a healthy democracy. Artists in Israel and abroad have struggled during the pandemic, but it is in dire times like these when we need art most. Inequity, […] 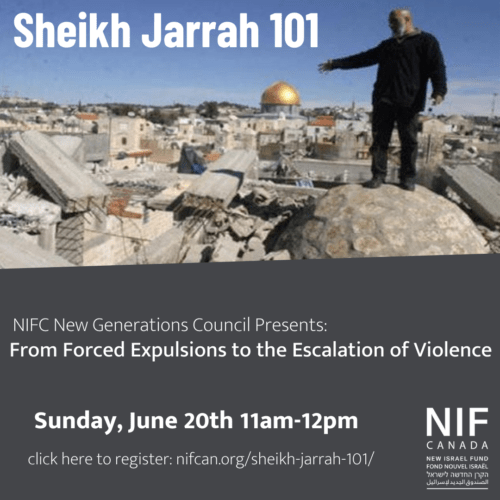 The bombing and rockets have stopped and Netanyahu is out. What’s next? How did a “real estate dispute” tip off rockets and bombing that killed 269 people, including 68 children, in Israel/Palestine? What happened in Sheikh Jarrah, and how does it fit into the wider context of the conflict? What might Israel’s new government mean […] 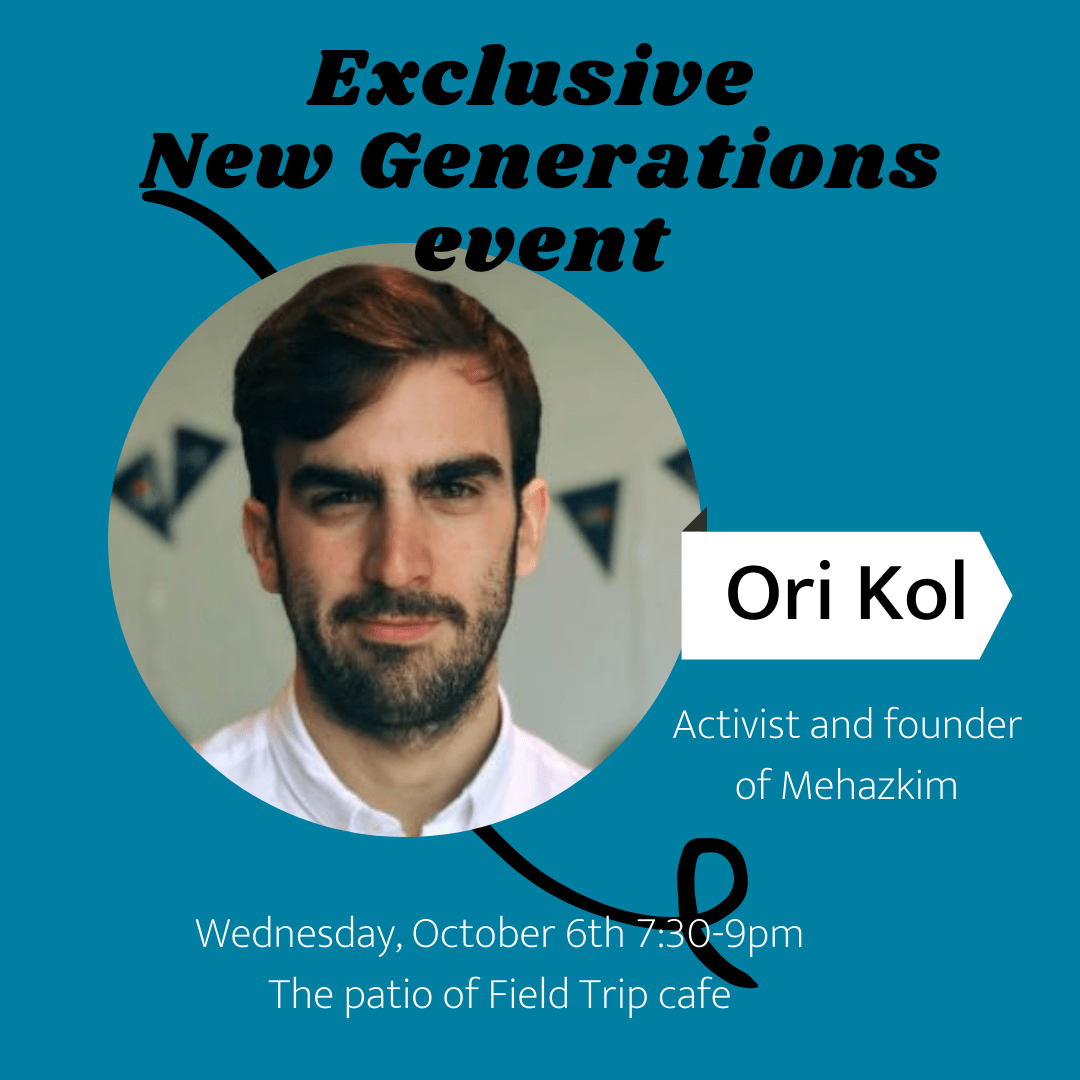 NIFC's New Generations Leadership Council is hosting a limited-space, in-person intimate conversation with Ori Kol, the founder of one of Israel’s strongest social media operations. Ori founded a grassroots movement for a more progressive and democratic Israel called Mehazkim (Strengthening), which now reaches over two million people on its Facebook page monthly! In this small […] 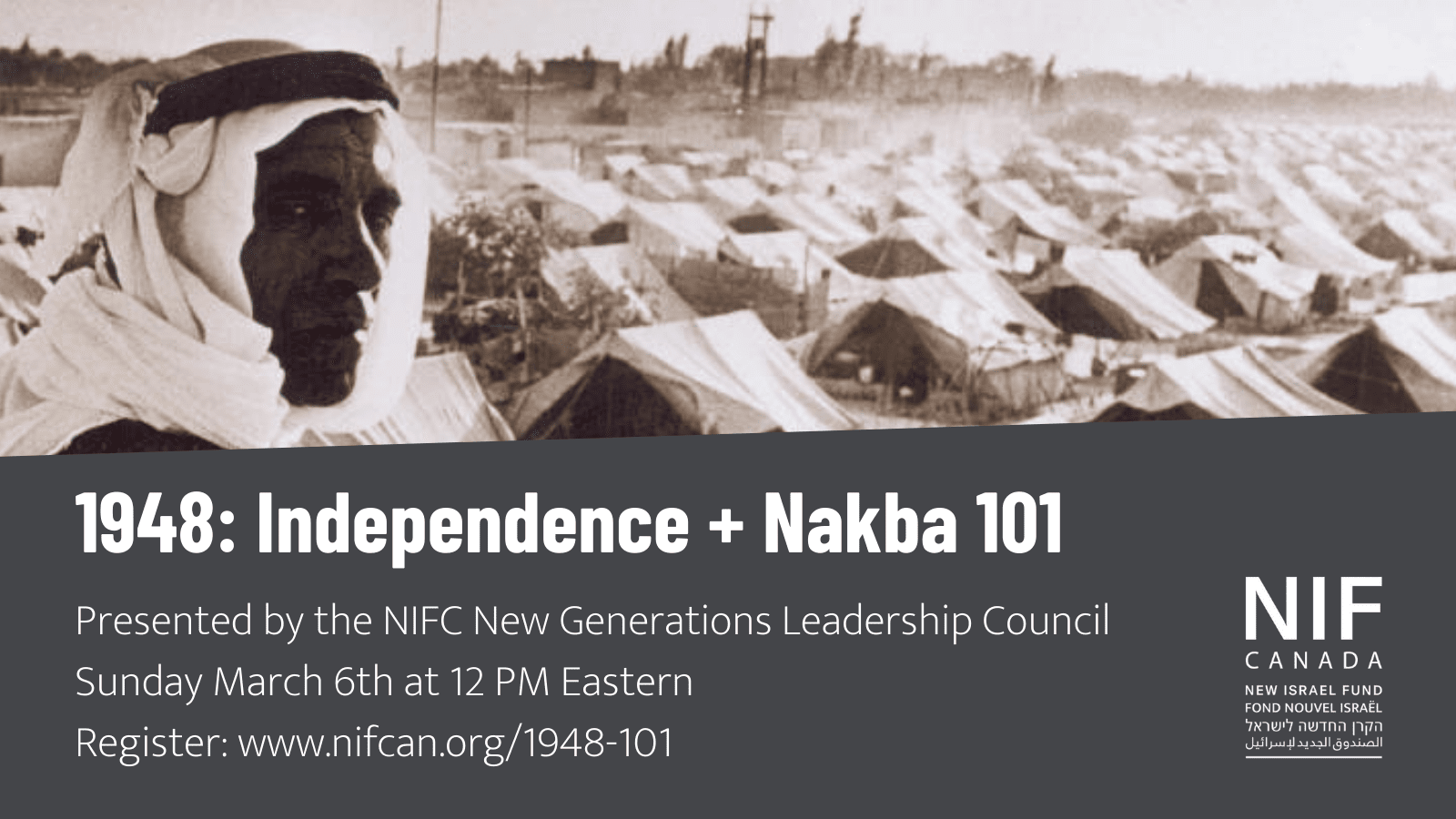 1948:  a year celebrated by some as Israel’s independence and denounced by others as a catastrophe that spelled the displacement of 750,000 Palestinians. What happened in '48? What events stoked the tensions that led to the Arab-Israeli War? What role did the British and Ottoman empires, the Balfour Declaration and two world wars play in […] 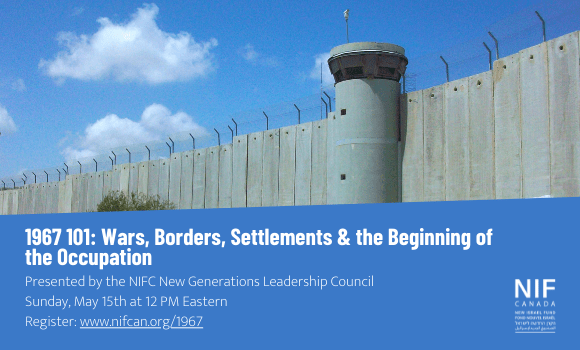 Six days of war in 1967 between Israel and its neighbours—called variously the June War, Six-Day War, and Naksa—had far-reaching consequences for Israel, the Israeli-Palestinian conflict, and the broader Middle East. Israel’s borders expanded to include East Jerusalem, the West Bank, Gaza, and the Golan Heights, territory it occupies to this day. And the settlements, […] 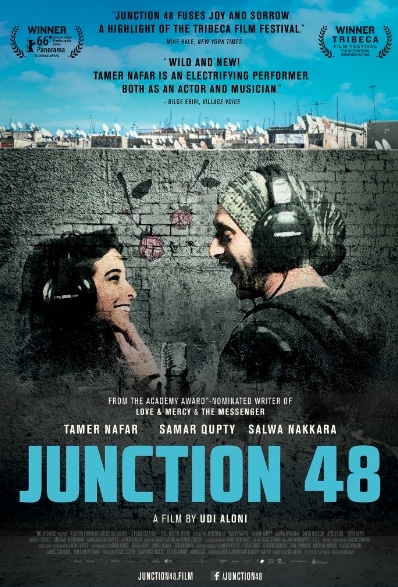 Join NIFC New Generations for a social hangout + screening of the film "Junction 48". Thursday, August 18th at 7:00 PM Field Trip Cafe, 3 Westmoreland Ave. We will screen the film outdoors. About the film: Palestinian rapper Kareem and his singer girlfriend Manar struggle, love and make music in their crime-ridden ghetto and Tel […] 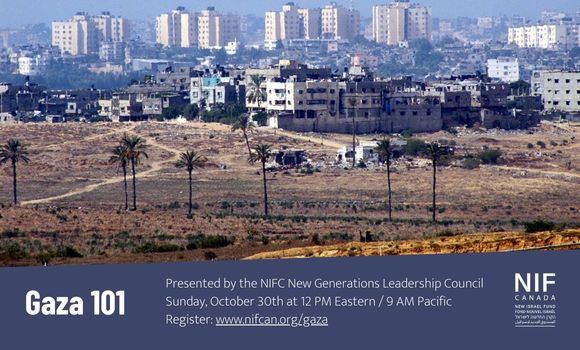 Described as “the world’s largest open-air prison,” Gaza is home to two million people, more than 80% percent of whom depend on humanitarian aid and two-thirds of whom are under 25. A well-documented humanitarian crisis, Gazans have been living under Israeli military blockade since 2005 and have been the victims of repeated violence between Hamas […] 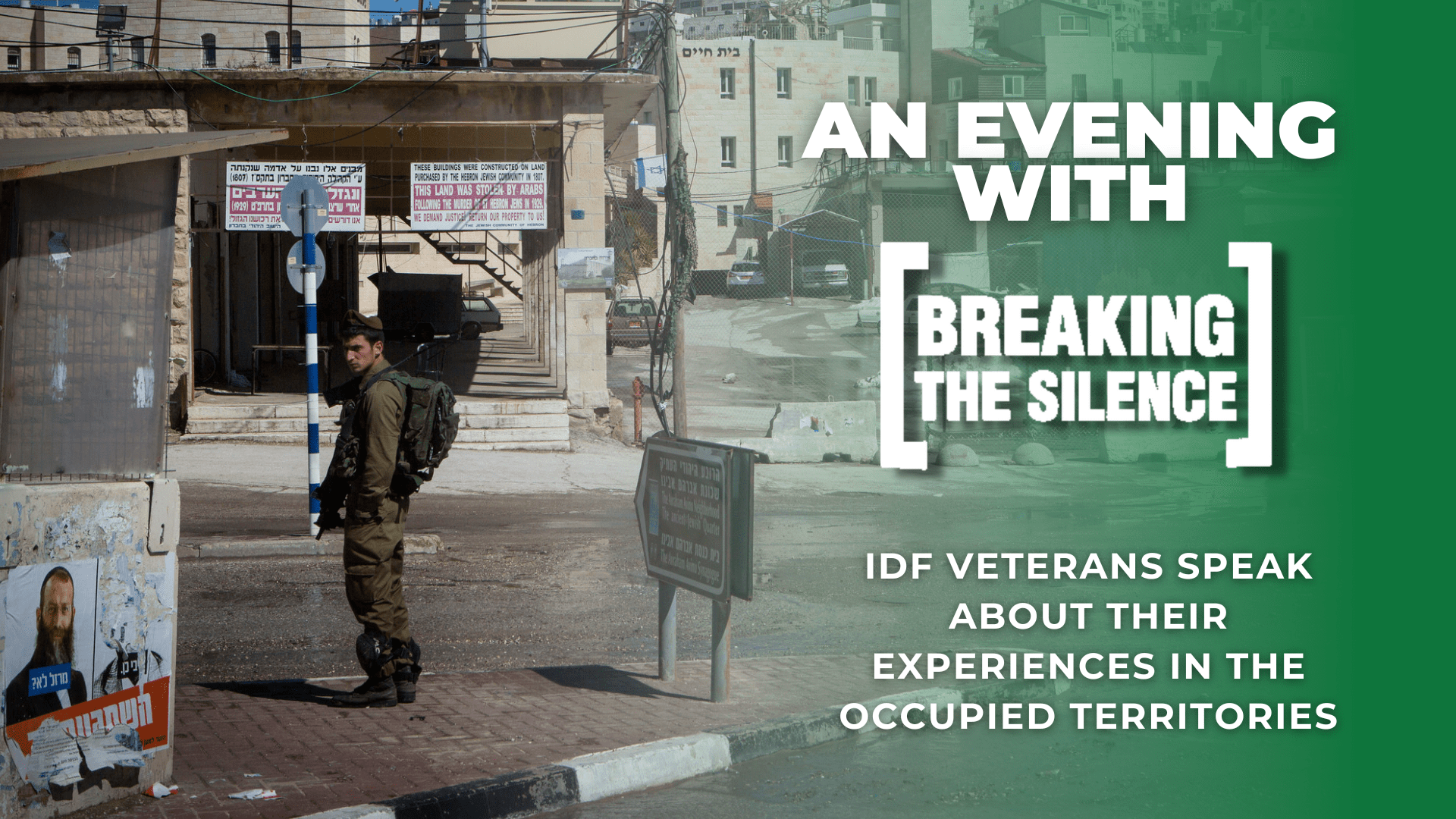 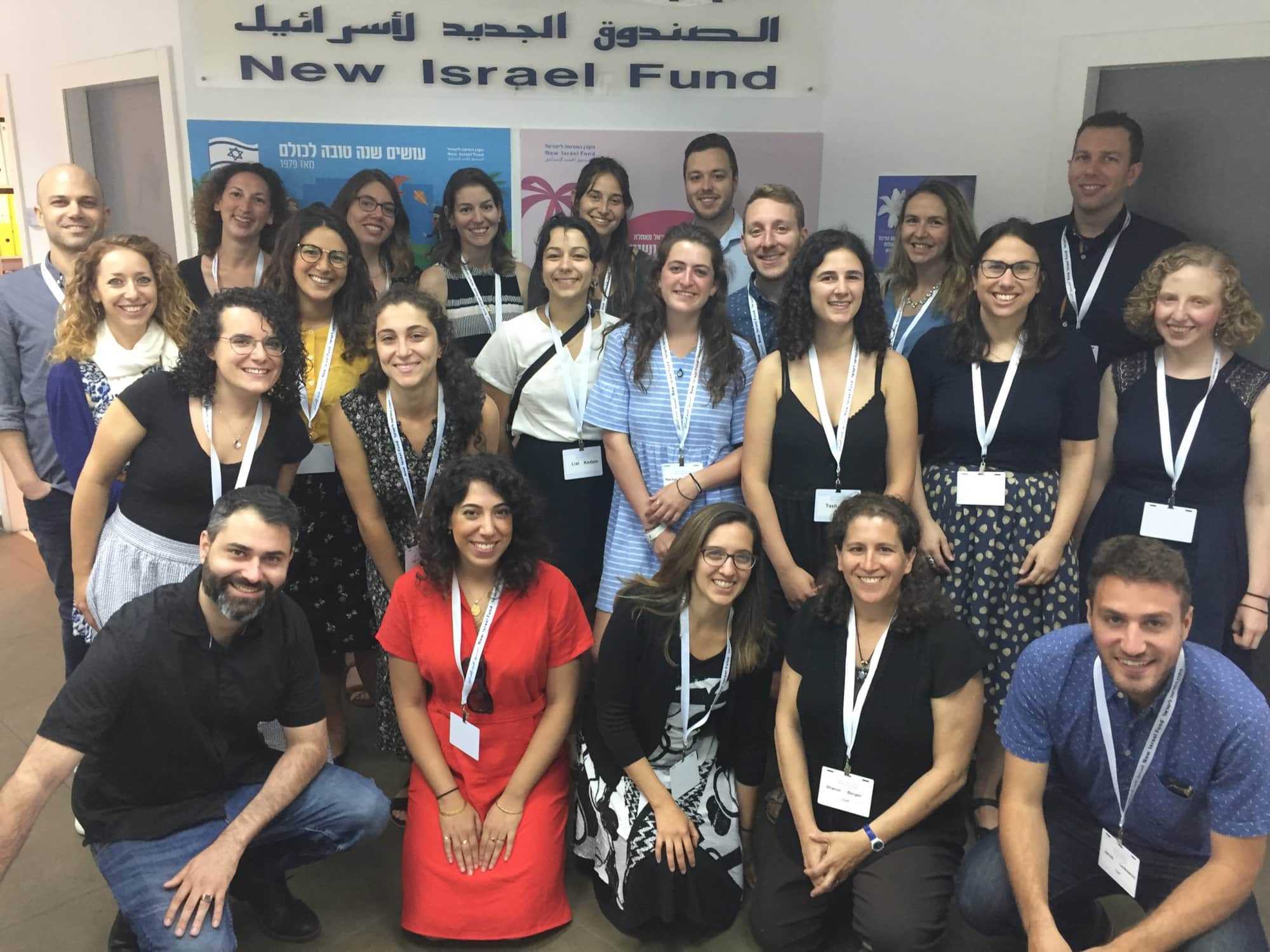 The kickoff trip for the year-long Naomi Chazan Fellowship, a program for young progressive leaders in the Canadian Jewish community. On this trip, participants can expect to: Connect with leading Israeli and Palestinian activists and learn about how various human rights and social justice struggles intersect Meet with Mizrahi activists fighting racism against their community […]