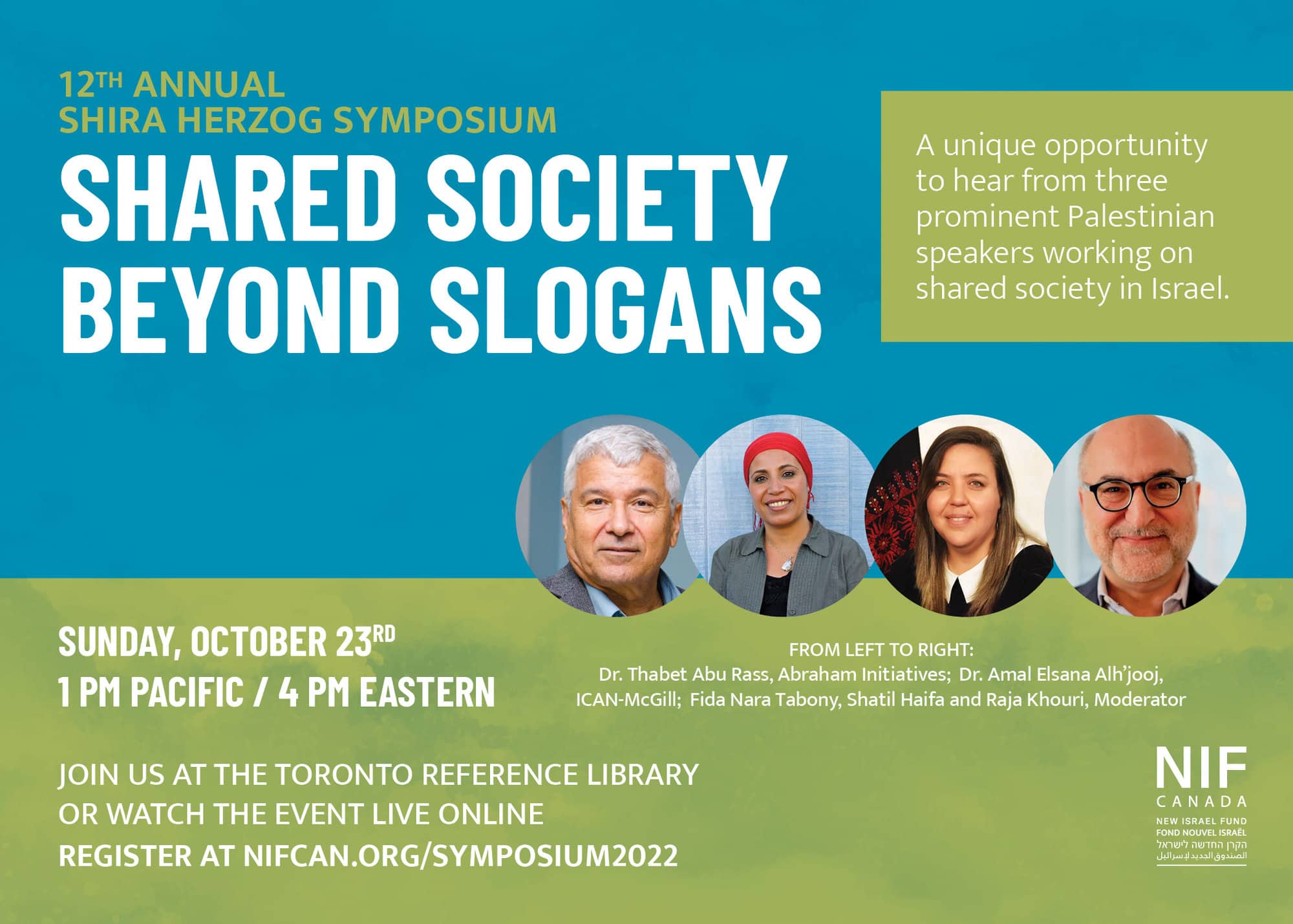 Join us in person at the Toronto Reference Library or watch the event live online.

A year and a half ago, it would have been hard to imagine an Israeli government with an Arab party in the coalition. As Israel votes for a fifth time in four years, was this Jewish-Arab partnership the beginning of a new reality – or just a phase?

True shared society in Israel is more complicated than simple slogans. The outgoing coalition faced tough compromises along unexpected fissures and ultimately collapsed. And while many issues improved, others like the occupation worsened. How do we move from slogans about Jewish-Arab partnership to the messy reality of a real relationship?

The 12th Annual Shira Herzog Symposium will unpack these questions and more. This year, we are excited that Canadian audiences will have the unique opportunity to hear from three prominent Palestinian guests including Fida Nara Tabony, Director of Shatil Haifa and Dr. Thabet Abu Rass, Co-Director of the Abraham Initiatives.

The annual symposium is named after Shira Herzog (z”l). Shira Herzog was a Canadian-Israeli leader, a loving critic of Israel, and a major supporter of NIFC before she passed away in 2014. Learn more about her here.

Fida Nara Tabony is the Director of Shatil’s Haifa office and Shared Society Program, overseeing and connecting For all the work of the civil society, shared society and Palestinian society in the north. She joined Shatil in 2021 after serving as co-director of the Jewish-Arab feminist social change organization Mahapach-Taghir for eight years. Fida has dedicated her life to women’s empowerment and to advancing a more just society in Israel. As a young woman, she volunteered at the Hotline for Victims of Sexual Violence and later held various roles at Women Against Violence, including Director of Social Change.

Fida was raised in Neve Shalom, an Arab-Jewish village near Jerusalem. Today, she is active in the struggle against the occupation and is a member of the National Secretariat of Hadash – The Democratic Front for Peace and Equality. In 2019, Fida ran on the Hadash list (number 8) in the national elections. Fida holds a Bachelor’s Degree in Social Work from Tel-Hai College and a Master’s Degree in Gender Studies from Bar Ilan University. She lives in Nazareth with her two daughters.

Dr. Thabet Abu Rass joined as co-CEO of The Abraham Initiatives in 2014, after six years of serving on their international board. Thabet has significantly strengthened The Abraham Initiatives’ practical and strategic partnerships with key public and political leaders in Arab society, and advocated programs and directives at the highest levels of government. His expert knowledge, strategic positioning, and experience in the field have directly impacted the breadth, programmatic impact, and direction of the organization’s work, transforming the landscape of Jewish­-Arab relations in Israel. Thabet has authored many publications and media articles on Israel’s Arab-Jewish relations. Prior to this role, Thabet served on Adalah’s Board of Directors from 2006 to 2008, and in 2010 became the director of its Negev office.

From 2007 to 2009, Thabet was co-­director of the NGO “New Horizon” – The Arab-Jewish Center for Dialogue and a Shared Society; from 2003 to 2005, he served as the director of Shatil’s office in Be’er Sheva; and from 2005­ to 2007, he directed a development project for the recently-recognized villages in the Negev. He is a member of the Board of Directors of several environmental and Jewish-Arab educational organizations, and has also been co-chair of the board of the Hand in Hand schools in Israel. Additionally, he is the co-founder of AEJI, the Association of Environmental Justice in Israel.

Thabet obtained a PhD in the field of Geography and Regional Development from the University of Arizona. He is a political geographer and has taught courses at Ben Gurion University and Sapir College on ethnic relations, land, planning and regional development. Thabet is married with two children.

Dr. Amal Elsana is the Founder and Executive Director of PLEDJ (Promoting
Leadership for Empowerment, Development, and Justice), which brings her vision of
empowering the most marginalized communities to address intractable social problems
to the local, national, and international levels. Amal has over thirty years of experience working at the intersection of community organizing and peacebuilding in the Middle East and Canada focusing on marginalized minorities.

Her approach to grassroots work focuses on strengthening the organic linkage between academia and communities. She has conducted postdoctural research with the Women and Public Policy Program at Harvard Kennedy School and McGill University. She is also the previous Executive Director of ICAN-McGill – the International Community Action Network at McGill University, co-founder of AJEEC – Arab Jewish Center for Equality, Empowerment and Cooperation, and a past co-executive director of AJEEC-NISPED.

Amal is the recipient of numerous prizes, awards, and distinctions. To name a few, she
was chosen as one of the Genius: 100 Visionaries of the Future by the Einstein Legacy
Project in 2017. In 2013, she was the recipient of the Human Rights Award by the New
Israel Fund. In 2005, Amal was nominated for the Nobel Peace Prize within the framework of 1000 women.

Amal is the author of Hope is a Woman’s Name, a personal memoir that recounts her
experiences growing up as an indigenous Bedouin Palestinian woman in Israel. While
addressing the challenges of patriarchal tribal traditions and the prejudices of the Israeli
state, the book explores how Amal has woven together every aspect of her
intersectional identity – Bedouin, Arab, woman, Palestinian and Israeli citizen – to
navigate between individual, social and political identities, and the systems of power
within which they exist. Amal lives in Montreal with her husband, Anwar, and twin kids, Adan and Moad.

Raja G. Khouri is CEO of Khouri Conversations, a human rights and inclusion consultant, the founding president of the Canadian Arab Institute, board member at Project Rozana (Canada), and a former 10-year commissioner with the Ontario Human Rights Commission. He is Canada Committee member of Human Rights Watch, and co-founder of the Canadian Arab/Jewish Leadership Dialogue Group.

Formerly a senior fellow with the Wellesley Institute, he also served on several government and civil society bodies, such as Ontario’s Hate Crimes Community Working Group, Pride Toronto Community Advisory Panel, and the Couchiching Institute on Public Affairs.  Raja served as president of the Canadian Arab Federation in the period following the events of 9/11. He has chaired conferences, given and moderated lectures, given numerous media interviews, and published commentaries in all major Canadian dailies.  He’s the author of Arabs in Canada: Post 9/11.

Virtual event details:
The event will be live-streamed via Zoom.