Strategies to End the Occupation with Breaking the Silence and B’Tselem and Prof. Mira Sucharov 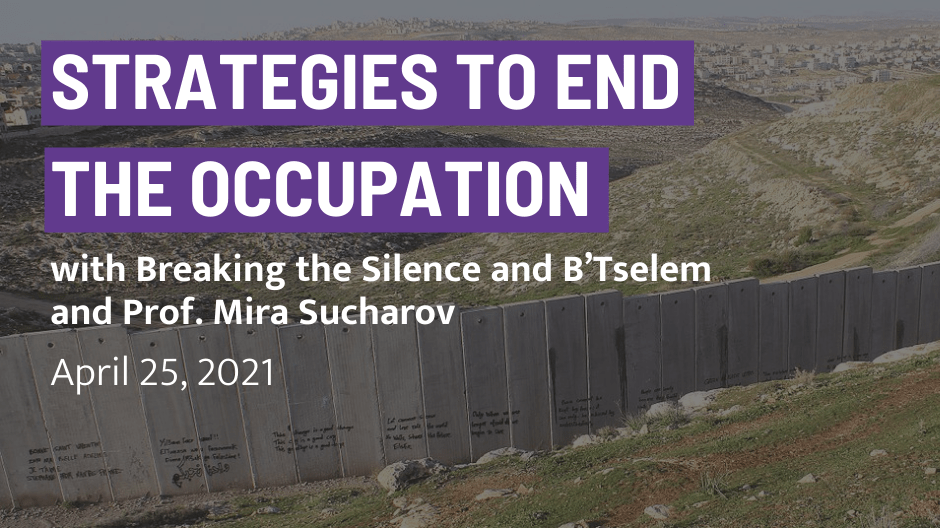 Sunday, April 25 at 12PM Eastern / 9AM Pacific
Register below to receive the Zoom link

Last month, Israel held another election– and yet in the four elections in the last two years, there has been little to no discussion of the occupation, Palestinians, or the road to peace. Major political forces in Israel are not interested in seeing it end. What can be done to return this urgent issue to the public agenda?

The New Israel Fund of Canada is strongly committed to ending the almost 55-year-old occupation. We’re proud this year to fund the work of Israeli anti-occupation organizations B’Tselem and Breaking the Silence. They are key partners in holding up a mirror to Israeli society and reminding the public not only that the Occupation exists, but that it is a strategic and moral threat to Israel’s democracy and long-term survival.

Join us and others who care about Israel to meet the Israelis who are taking bold steps to keep the occupation on the public agenda.

Dr. Mira Sucharov is Professor of Political Science at Carleton University where she specializes in Israeli-Palestinian relations, op-ed writing and social media engagement. She is the author or co-editor of five books, most recently Borders and Belonging: A Memoir (Palgrave Macmillan, 2020). She is the founding co-chair of the Jewish Politics Division at the Association for Jewish Studies, and is co-editor of AJS Perspectives. Dr. Sucharov is a five-time teaching award winner, and holds the University Chair in Teaching Innovation.