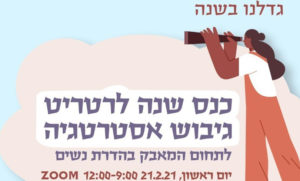 Around the world, COVID-19 has caused major setbacks to gender equality. Earlier this winter Assistant Secretary-General for UN Women Anita Bhatia told the BBC that “everything we worked for, that has taken 25 years, could be lost in a year.” In Israel, like in most places, the increase in domestic work has fallen mostly on women. In Israel, 2020 NIFC project partner The Adva Center reported in June 2020, women were doing 61% of housework and 64% of childcare in Israeli families; since the onset of the pandemic, men’s share has not increased.

COVID-19 will have long-lasting implications for women’s equality in education, income, health, decision-making, and safety. In Israel, the pervasive exclusion of women from the public sphere only adds to the challenge. Because of widespread and widely accepted religious norms, Israeli women are confronted with exclusion on the basis of gender on the street, during recreation, in the workplace, in schools and universities, at medical clinics and hospitals, and in government. A cross-sector struggle against this phenomenon is currently being led by the 14-member organizations of the Shatil-coordinated Forum Against the Exclusion of Women, a 2021 NIFC project partner.

The Forum, which includes a wide diversity of organizations including the New Haredim and the Secular Forum, met last week to strategize towards gender equality. Political psychologist Haggai Elkayam presented fascinating preliminary findings from research undertaken in cooperation with Shatil to identify new approaches to shift public opinion and mobilize different segments of the population. Elkayam presented insights gleaned from focus groups of young and middle-aged secular women, similar groups of men, and haredi women of different ages.

The research found that the secular public is most concerned with gender segregation that impacts them directly. For example, when female soldiers are forced to dress modestly on army bases where observant men are present, or when separate hours are designated for men and women to visit nature reserves. These and further findings are helping shape the Forum’s work. Smaller groups of Forum members are already at work, exploring ways to use the findings to help develop advocacy campaigns as well as support ongoing efforts to create resources for teaching gender equality in schools, pre-military academies, and other educational institutions.

The annual retreat held by Shatil provided an opportunity for members to reconnect and reaffirm their commitment to combating the exclusion of women, and to begin planning for the emerging post-pandemic reality. Forum members also bid farewell to Michal Gera Margaliot, who in December left her position as director of NIF funded Israel Women’s Network (IWN), the country’s leading feminist organization. Members expressed gratitude to Michal, who spent the past four and half years overseeing the legal representation of dozens of victims of gender discrimination, the publication of hundreds of position papers, and public campaigns on issues ranging from gender-based violence to the disproportionate economic impact of COVID-19 on women.