Tackling Racism and Ableism in Policing 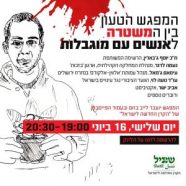 On the morning of May 30th, Jerusalem woke up to the announcement that a Palestinian man was shot to death by the border police. The public soon learned that the man was 32-year-old Eyad Hallaq, who was unarmed and on his way to the Elwyn center, where he spent his days learning to be a kitchen worker. He had run away from the police because he didn’t understand what they wanted from him. Eyad Hallaq was autistic.

“This terrible murder was a result of two main factors: one, that he was Palestinian so police automatically assume he’s dangerous and two, he was a person with a disability,” said Tzlil Rubinstein, the Shatil Democracy Organizer who led a Zoom panel on police brutality and people with special needs on June 16th.

“This is the result of racist policy that doesn’t seek to find a solution but chooses violence again and again,” said Tzlil when introducing the panel. “The killing shocked the Israeli public but it’s not the first time this has happened. Just in the past few months, we know of two others killed by police because they weren’t from the right nationality or didn’t have the right skin color.”

With the world up in arms over the brutal police murder of George Floyd, Israel faces its own stubborn police brutality issues. “Police violence is not a new topic,” said Tzlil. “Ethiopian, Haredi and Arab citizens have struggled against it for years. And the finger is lighter on the trigger when it comes to Palestinians.”

In addition to those mentioned above, police in the past 23 years have killed 13 young, unarmed Israelis of Ethiopian descent. Last week marked the first anniversary of the death of Solomon Teka – the first such case in which a police officer was brought to trial after intense public pressure.

Right after the death of Eyad Hallaq, Tzlil went into action and organized the panel, “The Charged Encounter between Police and People with Special Needs,” which attracted 80 activists and more than 6,000 views online. The panel aimed to both expose people to what happens in the encounter between people with disabilities and police and discuss possible actions to mitigate police violence. Among the panelist were a woman with mental health problems who told a shocking story of being handcuffed, beaten and kicked by police after she filed a complaint about police entering her home without a search warrant. She woke up in the hospital.

Other panelists include Issam Jamal, a lawyer and the director of Elwyn-Al Quds in Jerusalem; Naama Lerner of NIFC project partner Bizchut, MK Dr. Yousef Jabareen; Noa Levy, Esq. of the Public Committee against Torture in Israel; and Aviv Yashar, a young social activist who is on the autism spectrum.

“We got a great law passed,” said Naama, “but there is no enforcement. The State Comptroller also wrote about it in his 2019 report. The courts took it seriously and invested a lot in training judges to deal with people with disabilities but the police ignored it. They train 60 officers a year out of a force of more than 30,000.

“The police need to know that this topic is important to the people in the highest echelons of government. That someone is watching them.”

Naama said Bizchut and other organizations developed a training program at the police departments’ request – which the police promptly ignored.

Said MK Jabareen:” There is a culture of violence among police. Even the fact that this (Iyad’s killing) was filmed didn’t stop them. East Jerusalem is under occupation which means the people there are fearful, suspicious and tense. People with disabilities feel distress when they encounter the police and think only how to get out of the distress i.e. to run. This distress is deadly. It causes the security forces to react with violence.”

Aviv Yashar, succinctly expressed the feelings of people with special needs about the police.

“When I see a police officer, I feel endangered. I don’t feel protected.”

He adds: “Not everyone with autism, or post trauma or a mental disability can think quickly in the moment, How do I get out of this encounter with the police in the best way? They panic. The police have no concept of how to deal with this.” Aviv has come up with a list of things the police should do, including visiting shelters where autistic people work so they can get to know them.

Panelists also stressed the need to train people with disabilities about how to handle an encounter with police.

Shatil plans to broaden its work against police brutality this year.

“We hope that the killing of Eyad will not be for naught and will result in the police, the government and civil society coming together to put a stop to unwarranted and tragic police violence,” said Tzlil.