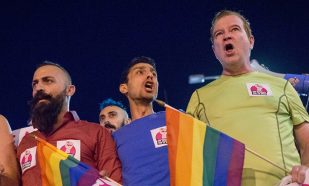 The Aguda – Israel’s LGBT Task Force has set up a hotline in Arabic to serve Palestinian citizens of Israel. The hotline, which is receiving financial support from the New Israel Fund global network, will provide both emotional assistance and routine information on LGBTQ matters.

The Aguda said, “This is only the start of the project, which will build an infrastructure for the Arabic-speaking LGBTQ community.”

The establishment of the hotline generated major media headlines in Israel not least because one of its sponsors, the Arab-owned Al Arz Tahini company, faced boycott calls from some in the Arab Israeli community opposed to LGBTQ rights.

Aguda CEO Ohad Hizki said, “Al Arz has taken a principled, brave and moving decision that will save and improve the lives of thousands of members of the Arab Israeli LGBT community.”

He added, “There is no doubt that the support of the company for the hotline demonstrates a welcome and changing trend for the LGBTQ Arab Israeli community. This is a time to strive for solidarity and equality and not let hatred triumph.”