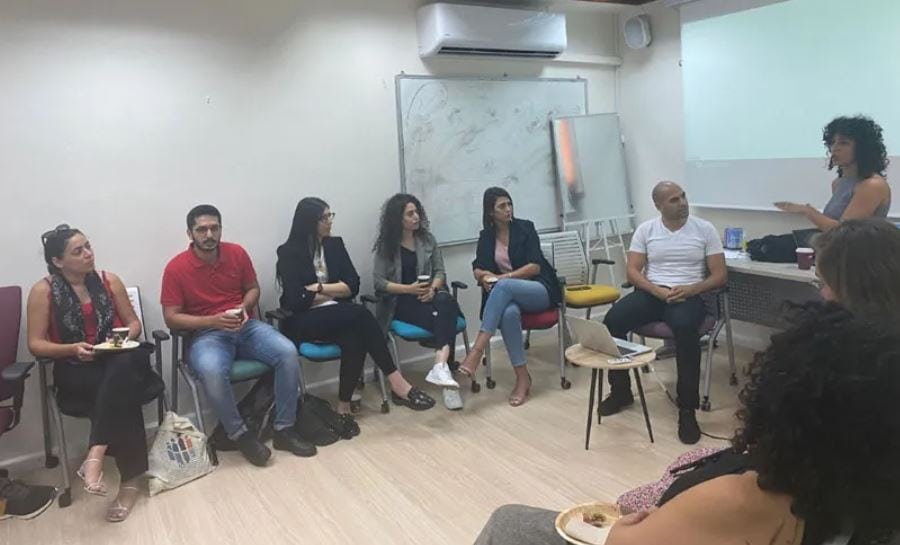 Walking back from the first meeting of the Shatil-coordinated Rawabit leadership training program, Tammer’s phone was lighting up feverishly with messages from the cohort WhatsApp group about how the program is precisely what Arab civil society in Israel needs. The enthusiasm over finally having a “home” to grow as social change leaders was overflowing. After the second meeting, two participants excitedly informed the group that they had already begun collaborating on a civil society initiative. With six more meetings and a seminar to go, participants are confident Rawabit will live up to its namesake in Arabic, “connections.”

Within Arab society in Israel, many young people are motivated to lead social change, says Shatil staff member and Rawabit coordinator Aya Zinatey. Yet under the circumstances of the Covid-19 pandemic, compounded with historical discrimination, Arab civil society in Israel suffers from a weakening of traditional frameworks for activism and social change. Effectively, there are dwindling opportunities to translate the energy of younger generations into practical skills and an organized network of leaders.

Rawabit was designed with this exact need in mind. Bringing together 20 activists and social leaders between the ages 25-35, the program emphasizes leadership development and cultivating powerful networks. The meetings take place in Haifa, where the whole cohort comes together for a full day of experiential and theoretical learning. The program ran its first cohort six years ago, and was revived again this year because of high demand.

Tammer, a program participant, has been working in the field of civil society for several years now. First introduced to Shatil through a Center For Policy Change event, Tammer knew he wanted to join Rawabit as soon as he heard it was relaunching.

“First, I believe in Shatil and the work they do for Arab society and Israeli society,” he said. But even more importantly, the program had received a rave review from a friend in the first cohort. “Basically he said you get to study and develop yourself…so if you have the opportunity you must join.” Tammer says he already sees growth in his approach to leadership.

When asked about the atmosphere of the meetings, Tammer highlighted the shared appreciation of having a structured place to come together and share ideas. More than just solidarity between participants, Rawabit stresses the importance of their extended network – which includes past cohorts and any speakers who come present.

Aya emphasized that Shatil’s resources, knowledge, and capacity are key to Rawabit’s revival. It was not a sure thing that an Israeli (Jewish) organization would be facilitating an Arab Palestinian leadership initiative, but the unique circumstances of Shatil have enabled this program not only to run, but to flourish; with over 40 applicants this round, and 10 people already on the waiting list for the next course, Rawabit is clearly in high demand.

The return of Rawabit is part of Shatil’s larger strategic shift towards addressing the inequalities facing Arab civil society organizations in Israel. A truly shared society cannot be achieved as long as civil society lacks a voice in public debates, sufficient human and financial resources, and the capacity to effectively network. The value of Rawabit is that its impact starts on the individual scale, but expands to a community-wide change when each of these leaders goes off to start their own social change initiative.

And the participants see it this way as well. According to Tammer, “the future leaders of Arab      civil society must come from this cohort.”