Solidarity With Victims of Settler Violence 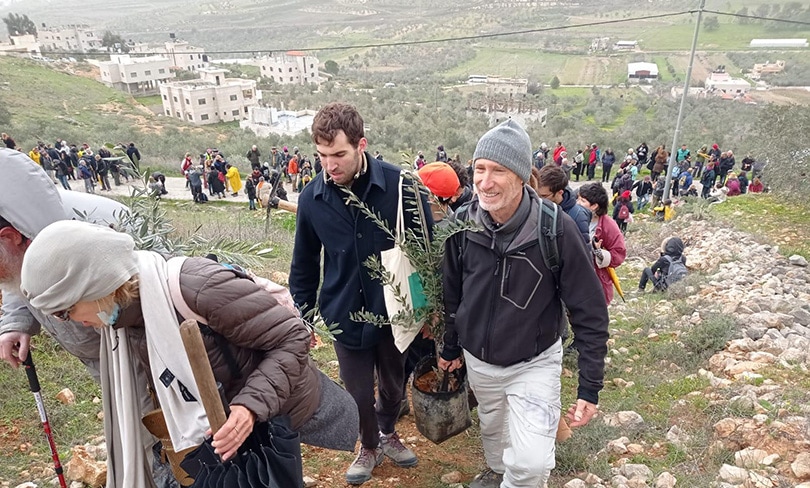 More than 400 activists took part in a tree-planting event in the Palestinian village of Burin near Nablus in the West Bank earlier this month to demonstrate solidarity with local Palestinians and human rights activists. The event was organized by Rabbis for Human Rights and funded by a New Israel Fund emergency grant.

Only two weeks earlier, settlers from the nearby illegal outpost of Givat Ronen attacked Rabbis for Human Rights activists in Burin. Unfortunately, this violence is nothing new. For years, Jewish settlers have targeted this area, frequently rampaging through the hillsides, burning and uprooting the olive trees of local farmers.

Rabbis for Human Rights Executive Director Avi Dabush said, “This picture of hundreds of Israelis, including those injured by Jewish terrorists returning to the scene of the attack two weeks after it occurred, represents a significant victory. We declared that we will not give in to violence and that we will return to the field to stand in solidarity with Palestinian olive farmers against those who regularly attack them. And that is what we did.”

Other organizations who took part in the rally included NIFC project partner Breaking the Silence, and organizations funded by the NIF global network including Mothers Against Violence, Zazim — Community Action, Combatants for Peace, Mehazkim – Fighting for a Progressive Israel, MachsomWatch, Omdim Beyachad (Standing Together), Peace Now, and Torat Tzedek – Torah of Justice.

Zazim, a former NIFC project partner, said, “Our community has rallied for the cause and we arrive here this morning to demonstrate that our answer to violence and hatred is partnership. They uproot and we plant until the occupation ends.”