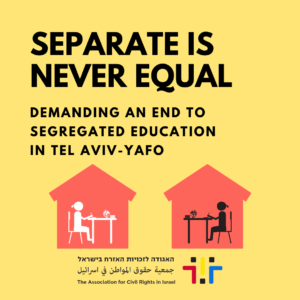 A few days ago, our flagship partner, The Association for Civil Rights in Israel (ACRI), submitted a petition to the Tel Aviv-Yafo Administrative Court demanding an end to the policy and practice of racial segregation in Tel Aviv-Yafo’s schools.

Nearly 70 years after the US Supreme Court’s precedent-setting decision in Brown v. Board of Education of Topeka that separate educational facilities are inherently unequal, the Tel Aviv-Yafo Municipality is separating the children of asylum seekers from their Israeli peers—creating clear separation and divides along racial and ethnic lines in schools.

ACRI broke down the implications of segregation on their new English Instagram page, from the harm caused to the children’s developmental and academic progress to its role in perpetuating and fostering racism and inequality in Israeli society.

There are nearly 7,000 children of asylum seekers living in Tel Aviv-Yafo, most of whom were born in Israel. Of them, about 4,500 attend segregated kindergartens and schools where there are no students who are Israeli citizens.

ACRI interviewed dozens of families affected by this policy. Just listen to what they heard:

Lila, mother of an 8-year-old: “He understands that although he was born and raised here like any Israeli child, he is unwanted here and does not belong, and I see that it bothers him. When we walk in the street sometimes and he points to something and asks me if it is ‘only for Israelis’ and if he is not allowed because he is from an African family…”

Letamskal, mother of three—ages 7, 8, and 11: “It hurts my heart to see the effect of separation on my children. They talk about being born in Israel and not understanding the meaning of the separation between them and white children, children who have citizenship […] Some time ago, people came to the entrance to the school where my children study and sprayed pepper spray there. I think segregation really endangers our children, making them an easy target for racist aggression.”

No child should feel rejected, ostracized, or discriminated against.

Since our inception, NIFC has been committed to ending discrimination and racism of all kinds in Israel. Our funded partners like ACRI – as well as Tag Meir, Shatil, and others – are leading the fight for equality and human rights.