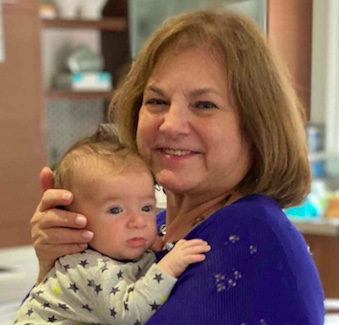 Continuing our series of profiles of NIFC leaders, this month we focus on Trudy Shecter.
Trudy Shecter is NIFC’s newest board member, joining the board in 2019.  But she has been active in the organization for many years, going back further than almost anyone else in Canada.  She served as NIFC’s very first national director more than thirty years ago.  In more recent years she has continued to be an active fundraiser.

Volunteers Harry Schachter and Daniel Gelfant spoke with Trudy about her involvement with the New Israel Fund and her commitment to Zionism and Israel.  The interview has been edited for concision.

NIFC: In 1986 you became the director of the New Israel Fund of Canada (NIFC). Could you talk about how that happened?

Trudy: I had been actively involved in United Jewish Appeal. I was a co-founder of a Business and Professional Women’s Network for young women who were seen to be potential UJA leaders. I’d been involved in that for a few years and learnt a lot about raising money for Israel.

To go back a touch. I’m a Zionist. I come from a very strong Zionist family. And I always had a dream that I wanted to live in Israel and had never made it happen…I talked about it and then other things would come up. I think that dream came from when I was a child. David Ben-Gurion came and spoke at Beth Tzedec.  And he had a session where he spoke to children.  I was one of a couple of thousand children who were there and the one thing I remember from his speech was that he said you have to go and live in Israel. The most important thing you can do as Jews is to live in Israel. And that stuck with me; I was maybe eight or nine at the time.

I only lived in Israel for a year, my third year of university. But in terms of things I’ve done and haven’t done in my life, not going to live in Israel is one of the top three or four regrets of my life. Even now at a very ripe old age and being a grandmother, I’m not going to go live in Israel – it’s unrealistic. But I still wish I could go live in Israel. So it’s a wish that I’ve cherished for a long time.

Anyway, getting back to 1986, I wasn’t satisfied with what I got from UJA.  I felt like almost all I did was write a cheque and I was starting to have questions about the politics, and I was looking for work. A friend of mine found out about the New Israel Fund and the fact that they were looking for a director. I met with the leadership and they offered me the job of being the first director in Canada.

NIFC: Let’s talk more about the early period for NIFC.

Trudy: I always say NIFC started in a box in a small bedroom in my house. And at the beginning mostly what we were doing was raising money with an emphasis on major gifts.  We organized telethons, built up a board. And just tried to make NIFC’s message of strengthening democracy in Israel known in the Toronto Jewish community. We were not welcome. We were really seen as a big threat.

Trudy: Because we’re going to take away all of UJA’s money. And politically we’re left wing. You know we don’t accept the settlements.

When I look back on it, I think, what could they possibly have been upset about. We were such a small organization. I guess it’s because we had some people giving money who were heavy hitters and obviously UJA would want their money or a big share of their tzedakah money. So, I felt pretty alienated from the community.

NIFC: Why did you take that on?

Trudy: Because NIFC to me represents the vision that I have for what Israel should be like.  At that time, the mid to late 80s, I was aware that I was becoming disillusioned with the way Israel was doing things; not so much as many years later.

NIFC: Could you elaborate a little bit on what NIFC stood for at that time?

Trudy: We were building up an organization that would raise money for projects to strengthen democracy in Israel, like women’s rights, Palestinian-Jewish relations, religious pluralism and tolerance, social justice, ACRI (the Association for Civil Rights in Israel).

NIFC: Where do you think your progressive Zionist views came from?

Trudy: It starts out with me being a very strong feminist. I have had no patience or even tolerance, which is a nice way to put it, for the way ultra-Orthodoxy treats women. So the women’s issues part of NIFC appealed to me. Also when I was in university and graduating and trying to figure out what I wanted to do with the rest of my life – I was about 22 at the time – I wanted to save the world. 15 years later, I think I saw NIFC as a way to contribute to saving the world. I was a bit more mature by then to realize that I probably wasn’t going to save the world, but I wanted to do work that would contribute to saving the world.

NIFC: You left your position at the Fund in 1990. What was your involvement after that?

Trudy: I was very detached from the Fund after I left. I was appointed a member of the Immigration and Refugee Board and you can’t do fundraising when you’re a governor-in-council appointment and you basically work seven days a week. It was just very very intense. But I kept giving money… I left the IRB in 2013 and then I reached out again. I kept saying to people, “I want to be more active; I’ll do anything. I’ll come and phone strangers,” which is like a radical thing to say. So gradually I got more involved.

NIFC: As a board member now, could you expand a little bit on fundraising and what is involved? How does a relatively small organization like NIFC approach fundraising? What’s needed?

Trudy: Well, I think that the organization has to be clear on what it is – what it stands for – and then have the ability to communicate that to potential donors. I mean you’ve got to keep servicing – stewarding is the fundraising word -stewarding your donor base. But we clearly need to find more donors and newer donors and always bigger donors.  I’m much less involved in that than I am in the people who give five hundred dollars and under, which I would like to see be bigger, and I don’t know how you make that happen. I’ve done a lot of one-on- one and now I have a list of donors who I’ve solicited or who’ve given and I call them and I write to them. It’s not just a once in December kind of thing. So all of that very hard, very detailed work is really important.

NIFC: When you were appointed to the board how did you feel?

Trudy: I was ecstatic. You don’t just get appointed to the board. I worked on it and when Ben and I first met, when he first started working for the Fund, I said I want to be on the board. I realized it might not happen tomorrow or next week but I want to be on the board and he told me that they were working towards me being recommended. So when I was appointed I was delighted.

I’ve only looked at the board from fundraising and programming. Now I’m involved with the Israel projects and how we decide. So it’s been a huge education and opening up.

NIFC: When you look at the situation in Israel and the troubling issues there for progressive Jews, do you worry that donors or potential donors will become exhausted because it’s so troubling?

Trudy: Yeah, I think some people may or will or have.

NIFC: And why don’t you?

Trudy:  Because Israel is at the core of who I am and what I believe in. And I so want Israel to be the light unto the nations and the country that people thought it was going to be in 1948, when the Declaration of Independence came out. I’m not giving up on Israel.  That would give Netanyahu his biggest victory if somebody like me gave up on Israel.