Continuing our series of profiles of NIFC leaders, this month we focus on Tema Smith. 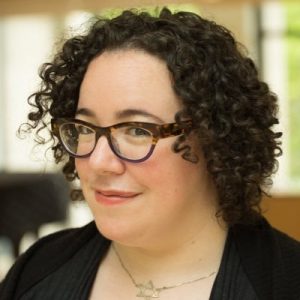 Tema is currently director of professional development at InterfaithFamily, an organization that empowers people in interfaith relationships to engage in Jewish life. She is a regular columnist with The Forward. Tema volunteers on NIF’s Program and Outreach Committee.

The interview was conducted by volunteers and NIFC supporters Harry Schachter and Daniel Gelfant.

Q: How did you come to be involved with the New Israel Fund?

Tema: I’ve always been very committed to a progressive solution to Israel/Palestine that also recognizes and secures Israel’s right to exist.  When I returned from Israel in 2008, I was looking for ways to continue my commitment to Israeli democracy and a two- state solution in a Jewish context and a place where I could talk about  the challenges I was having with the occupation, Israel’s domestic policy and more. And there just was none, especially with  people my own age.  And when I stumbled upon New Israel Fund while working as staff at Congregation Darchei Noam, I found something that was dedicated to the same kinds of commitments that I was.

Q: Tell us about your time in Israel.

Tema: I spent a year in Israel as a graduate student at The Rothberg International School, the English language institution of the Hebrew University, and participated in a program called Encounter where students on their Israel year had an encounter with Palestinians, exploring East Jerusalem and the situation on the ground there. And that lit the fire for me. Around the same time I went on a Breaking the Silence tour to Area C, to the South Hebron Hills. So I was really immersed in Israel alongside my studies.

Q: You mentioned the Breaking the Silence tour you did. How significant was that as part of your experience?

Tema: It was a pivotal moment. Yehudah Shaul who led my tour was one of the founders of Breaking the Silence. He talked a lot about how individual soldiers are not doing anything wrong, but that there’s no way to run an occupation in a way that isn’t morally corrupting. He removed the idea of the individual soldier being culpable, the way you might think when you see the videos on TV of something terrible happening or somebody getting arrested in a brutal way. And that was really a pivotal moment in the way I thought about it.   Also to be honest I knew very little other than the catch phrases about Israeli settlements at the time and they actually spent a long time on that trip talking about the different kinds of settlements. Their focus when they talked about the settlers were the illegal settlers who would take over a hilltop and then expanded and expanded and expanded.

Tema: Look, at the end of the day the solution to the conflict is going to be figured out by the Israelis and the Palestinians. And the role of organizations like Breaking the Silence is to hold their own country to account in the same way that we have activist organizations in Canada that stand up when they see something going wrong. Yes, I think some people are upset by their methods and feel that they’re painting an unfair picture. At the same time they’re not anti-Israel. They don’t say Israel has no right to exist.

Q: How do you sum up the influence that your time in Israel had on you?

Tema: It shaped the trajectory of my life. It wasn’t long after I came back that I actually took a step back from academia and became a Jewish professional. In Israel, I found this really engaged Jewish community speaking the values language that I recognized as my own. And I experienced different ways of relating to questions like Israel/Palestine or Women’s Rights in Israel, or LGBT rights. We were having hard conversations about that as people who had chosen actively to spend a year living in Jerusalem.

Q: How do you connect what you learned with what NIF does in Israel?

Q: Your father is black and non-Jewish; your mother is Jewish of Ashkenazi background. How does your racially mixed background fit in with your thinking about the New Israel Fund?

Tema: Most of the time in Israel no one takes me for anything other than a white Ashkenazi Jew from North America. But the stories that I’ve heard from colleagues of mine who have spent considerable time in Israel are really upsetting. For example, a Korean-Jewish friend of mine is constantly mistaken for a nanny or a foreign worker and with all the tension around foreign workers right now is told to go back where she came from. When I look at it as a Jew of colour it’s not just about me. It’s about of course Ethiopian Jews and other racially diverse Jews within Israel whose rights should be secured. Ostensibly this is the homeland for all Jews. Those are some of the visceral reasons that the New Israel Fund has been a really appealing place for me to dedicate my time. Because ultimately when I give time or money to the New Israel Fund what I’m essentially saying is I am committing myself to helping the people on the ground, who know the situation, make Israel into a country that lives the values that it claims to espouse.

Q: I have one last question about the issue of tension or conflict within the Canadian Jewish community, particularly from your vantage point as someone who has worked professionally in the Jewish community.

Tema: Canadian Jews are getting more open to talking about the challenges with Israel. And that’s really encouraging. One of the challenges is that we don’t seem to have a shared vocabulary to talk about the facts, to the point that there are still people who will argue when you use the word occupation, even though that’s actually the word used by the Israeli army to describe the situation. Same with blockade of Gaza. That is the actual Hebrew word used to describe the situation. And so for me when I think of some of the challenges that I’ve faced, and I have heard extensive complaints about the New Israel Fund from people who I’ve encountered and they’re not grounded in fact, that is for me one of the biggest challenges.

Q: What are your personal goals for the NIF?

Tema: For me, really meaningful work is brainstorming ways to engage more people. The more of us who have a shared vocabulary grounded in fact that I think New Israel Fund is very good at providing, the better it will be for people who want to have nuanced conversations about the role that Canada can play in supporting a more just Israel.