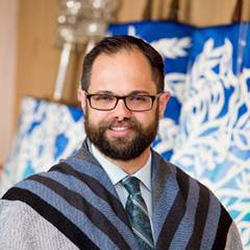 This month, we’re focusing on Rabbi Micah Streiffer, a member of the NIFC Advisory Council for the past two years, looking forward to his continued work empowering youth and building coalitions within Israel.

Volunteers Harry Schachter and Shelly Sanders spoke with Rabbi Streiffer about how his southern childhood shaped his views and led him to the New Israel Fund of Canada. The interview has been edited for concision.

Q: I understand you grew up in the American South. Can you give us a little bit of background and how that shaped you?

Rabbi Streiffer: Absolutely. I was born in Alabama and grew up largely in Louisiana, I am fifth generation New Orleanian. My dad’s dad’s dad’s side came over to New Orleans around 1900, and lived in Louisiana for a long time. My childhood was kind of this gamut of extremely small to moderately small Jewish communities. And what I learned was that Jewish identity involves active affiliation with the Jewish community:  youth group, summer camp, synagogue. That’s how you affiliate with the Jewish community in the south, as opposed to a place like Forest Hill, where you don’t have to go very far to find Judaism.

Q: When did you think about becoming a rabbi?

Rabbi Streiffer: What drove me toward being a rabbi really was my involvement in Jewish camp and Jewish youth groups. I attended the Jewish and the Reform Jewish camp in Utica, Mississippi for many summers, and really fell in love with camp-style Judaism there.

One of the experiences that really propelled me toward the rabbinate was spending a semester in Israel, my grade 11 year, on a Reform movement program that at the time was called the Eisendrath International Exchange. Today, it’s called Heller High School. I think that program really shaped my sense of myself as part of the Jewish community and also my sense of myself as belonging to Israel.

Q: I know you’re a vegetarian. Maybe you can talk about the organization Jewish Veg that you are involved with.

Rabbi Streiffer: I am on their advisory council. I do believe very strongly in the Jewish values of vegetarianism, not that everyone has to be.  I think we express our Jewish values in a variety of ways. As a Reform rabbi, I really believe there’s more than one right answer to a question and that the values behind the traditions or behind the laws are often more important than the actual laws themselves.

Q: You came to Temple Kol Ami in Thornhill in 2011. How did that come about?

Rabbi Streiffer: I came from Charlotte, North Carolina. I had been the associate rabbi at Temple Beth El, about an eleven hundred family congregation. That was my first pulpit out of rabbinical school. I was there for four years, learned a lot, and had the opportunity to work with a very capable and senior rabbi who taught me a lot. Then, I felt ready to go out on my own and I fell in love with Kol Ami.

Q: Can you tell us about your involvement with NIFC?

Rabbi Streiffer: I’ve been on the Advisory Council for maybe two years. I love that we’re promoting Jewish and democratic values in the Jewish and democratic state. Israel is meant to be the state expression of Judaism, and Judaism demands certain things of us, like social justice, to treat everyone as an expression of God’s image. And I think the New Israel Fund intends its work to build those values within the Jewish state. We’ve had a couple of programs in my synagogue that were New Israel Fund-related, and I’m happy to be on the Advisory Council. New Israel Fund has been slowly trying to extend its influence in the northern part of Toronto. And so there have been a couple of programs that we put on up here.

My other, more direct involvement, has been with a teen Israel curriculum. Not with the putting together of it, the New Israel Fund pays people to do that work better than I could do it. But in helping to bring teen Israel education from a pluralist and democratic values perspectives into a few synagogues. So I’ve done some consulting with them. We, as a congregation, are piloting that program right now. And I also sat with the education group that was putting it together to give some suggestions and to help figure out how to move that teen education into some camp and synagogue settings.

The organization is doing really, really good work, and I think I’m at the beginning of growing my involvement.

Q: What are some things that you would like to see the New Israel Fund doing going forward?

Rabbi Streiffer: I see the New Israel Fund involved in building coalitions of groups within Israel. The New Israel Fund is involved, for example, in Tag Meir, a coalition of people who care about human rights and democratic values in Israel. The work I’m most impressed with, I think, is coalition building. I first learned about New Israel Fund because NIF was involved with the Reform movement. I think these communities have shared values — coalition building, and giving a voice to people in Israel who care about democratic values, but who haven’t always had, especially in the last twenty years, a very loud voice in Israel.

Q: What are your thoughts about anti-Israel and antisemitic activity and thinking from people in academia?

The challenge is that when you get to a university setting, I’m not sure there is a lot of nuanced thinking around Israel on either side. People stand on street corners and shout at each other. And there’s truth to what both sides of the street are saying. In terms of what New Israel Fund put together, it’s a curriculum that focuses on diversity and pluralism and on what’s great about Israel, which has a lot to do with expressions of Jewish life as well as other kinds of life. I’d like to teach young people that Israel is more than orange groves in the desert, that Israel is a very complicated place that has been a triumph of Jewish spirit, but is also still striving toward the triumph of our Jewish values.

Q: Is there anything you want to add in terms of the future of NIF?

Q: You officiate at marriages between Jewish and non-Jewish partners. Maybe you can speak to that briefly.

Rabbi Streiffer: I’ll say it this way– I perform Jewish weddings. I believe that Jewish families come in all shapes and sizes and that some Jewish families include a non-Jewish partner. So when a Jewish family or when a couple is looking to have a Jewish wedding, in the context of a Jewish life that they’re building, I want to perform that wedding. About four or five years ago, I made the decision to start officiating Jewish weddings that include a non-Jewish partner. That’s the language I use. I don’t call it interfaith because they’re not interfaith, they only have one faith in them, which is Judaism, but not necessarily both partners are Jewish.

For me, inclusion and engagement are absolutely central in Jewish life. I believe that building the Jewish future means meeting people where they are and engaging them in Judaism today. And if a couple comes to me and says we want to have a Jewish wedding, we’re looking to have a Jewish life together, I just can’t see how I would say no to them.

Q: There has been a fairly long running issue going on about the naming of a school in the Vaughan area (north of Toronto where Temple Kol Ami is located) and you and Kol Ami, your synagogue, ended up peripherally, at least, involved or engaged in that issue. Could you talk about the issue, what’s going on and where you came in?

Rabbi Streiffer: Yeah, absolutely. The issue is that Vaughan Secondary School is named for Benjamin Vaughan, who was a slaveholder. It seems, to a lot of people, inappropriate to have a school named for a person whose actions are antithetical to the values we espouse as modern Canadians, and that includes slavery and racism. And so in that context, the African-Canadian community of Vaughan actually began a campaign to rename Vaughan Secondary School.

The school district put together a process for renaming the school, which involved a survey. That survey came back being something like two-thirds in favor of renaming the school after Hodan Nalayeh, a Somali-Canadian entrepreneur and activist killed in a bombing in Somalia a couple of years ago. The second most voted-for person was Elie Wiesel. And there were a couple other Holocaust survivors in there as well.

What was really unfortunate, was that there was an escalation into what was starting to look like a conflict between the Jewish community and the Black community. And that seemed not good for anyone in our community. I believe, first of all, that the values of anti-racism, doing away with the name, are absolutely in line with our Jewish values, in addition to our Canadian values.

I think we all benefit when we work together to dispel bigotry, whether it be anti-Semitism or whether it be anti-black racism. The statement that we put out was to distance ourselves from any kind of accusations that there was a rift between communities. It seems appropriate to us that the school that once bore the name of a slave owner, now be named after a prominent African Canadian. We support a fellow persecuted community in right a historic wrong against their community.

Q: We’ve talked about quite a number of things: the New Israel Fund of course, vegetarianism, anti-racism. I wonder, is there a way in which those all come together for you in what you believe and act upon? Is there a way you can sum that up?

Rabbi Streiffer: I think it comes down to the idea that Judaism teaches that all people are created in God’s image. While that may sound like a universal value, it’s also a Jewish value. Jewish life, for me, is an expression of that idea and of the ways we go about repairing the world. Ultimately, Judaism teaches us that our job on Earth is Tikkun Olam, to repair the world. Sometimes that involves picking up trash off the street or donating money to a soup kitchen. Sometimes, it means being involved in advocacy both on our local level and in Israel, or on the international level.