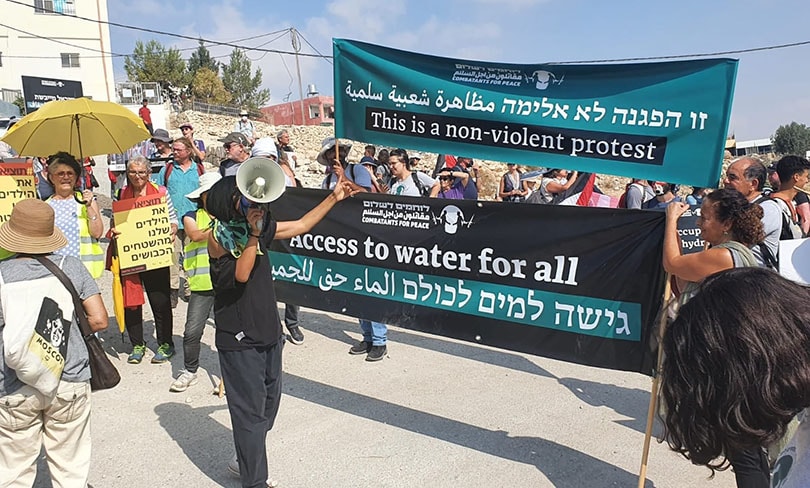 Hundreds of Israelis came to the South Hebron Hills last weekend to protest settler violence and stand in solidarity with the Palestinian villagers in the region. The rally was held at the Palestinian village of Mafkara where masked settlers rampaged on Simchat Torah, hurling rocks at villagers. During their attack, the settlers threw a rock at a three-year-old boy, leaving him hospitalized with a fractured skull and internal bleeding. So far, six settlers and Jerusalem residents have been arrested while two Palestinians were arrested for attacking soldiers.

Local Palestinian resident Basil Al-Adra, who witnessed the scene, said, “There must have been around 100 settlers, from all the outposts near Mafkara. They smashed windows, punctured car tires, and entered homes. And they injured a child as they hurled stones into his home.”

The Israeli protesters included NIFC project partner Breaking the Silence; organizations funded by the NIF global network, Combatants for Peace, Peace Now, Machsom Watch, and Omdim Beyachad (Standing Together); and other organizations like Mothers Against Police Violence, the Jordan Valley Coalition, and All That’s Left. Together they brought water to the region, which is cut off from water sources and causes hardship for local farmers.

MK Mossi Raz (Meretz Party) who participated in the protest said, “The military violence and the violence by settlers must be uprooted and those responsible for this must wake up.”

Settler violence has been on the rise in recent months, as settlers try to “create facts on the ground” in the South Hebron Hills by building illegally, encroaching on the nearby Palestinian villages. While top Israel Police and IDF officers have condemned the violence, they have taken little tangible action to curb the violence from settlers.

The New Israel Fund of Canada condemned the settler attack and issued a formal statement here.

Photo courtesy of Combatants for Peace