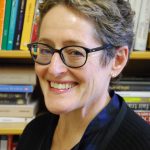 On Sunday, September 13th, during NIFC’s 10th Annual Shira Herzog Symposium, we publicly announced a new way we’re commemorating the woman whose name is kept alive through it — Shira Herzog.

Shira left an indelible mark on the Canadian Jewish community and the New Israel Fund of Canada, as well as Israel itself.

In honour of her sixth yahrzeit, the tenth anniversary of the Symposium, and the retirement of one of NIFC’s most important leaders, we announced the Shira Herzog Award and its first recipient, Joan Garson, as she retires from the NIFC board after 11 years of indefatigable leadership.

The Shira Herzog Award will be “awarded every year or every other year to a Canadian or Israeli who has made an outsized impact on equality and democracy in Israel, either on the ground there or from here at home in Canada.”

Joan Garson certainly fits that description. Her 11 years on the NIFC board, including three as its president, were marked by a significant increase in NIFC’s public profile and a broadening of our base of support. Joan was also the brains behind the creation of NIFC’s Advisory Council and served as its Chair. Over the course of four years, Joan quickly expanded the Council — most recently, with the addition of 13 new members.

We are incredibly appreciative to Joan for her leadership, her insights, and her passion for NIFC’s work, and grateful that she will remain involved with NIFC through the Advisory Council.

When presenting the award to Joan Garson, NIFC President Linda Hershkovitz said, “It’s impossible to enumerate all the things that Joan has done to build progressive Jewish life…She has given boundless time and energy [to NIFC]. Her strategic thinking and warm friendship are felt in this community from top to bottom.”

In accepting the award, Joan said, “Shira dreamed that NIFC would become a louder and ever-more effective voice for a better Israel, and this is becoming true. Thank you, Shira, for pushing me and NIFC to be the best we can be, to take risks, to be brave, because we must. Israel needs us.”