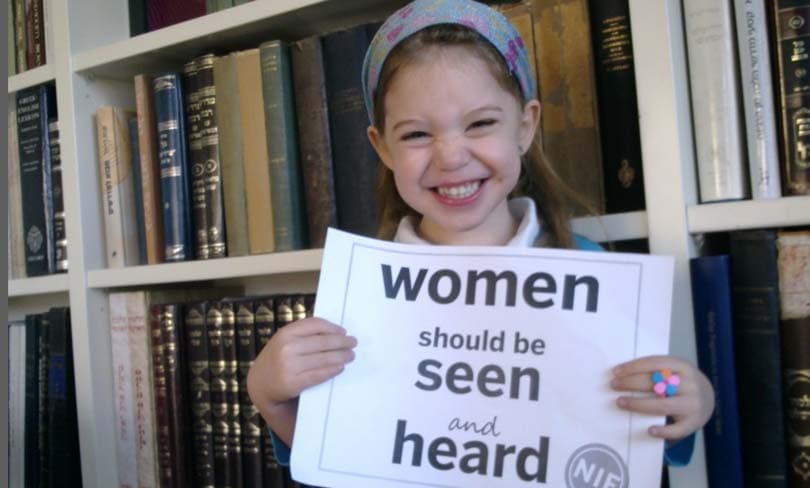 The World Economic Forum’s 2021 Global Gender Gap Report ranks Israel 60th out of 156 countries, suggesting that gender disparities in Israel are significant. The report notes that, around the world, the time needed to close gender gaps has increased by more than 30% as the result of COVID-19’s disproportionate effects on women. Women’s International Zionist Organization (WIZO) chairwoman in Israel, Ora Korazim, told the Jerusalem Post earlier this year that “Israel is in a worrying process of a regression of the status of women.”

Not all of this can be attributed to the cascading effects of the pandemic. In Israel, the religiously-motivated exclusion of women — from public, educational, political, and professional life — is a persistent problem. “Religious leaders and politicians use their influence to exclude and segregate women in public spaces,” explains Shatil’s religious freedom coordinator Brit Yakobi, who coordinates the NIFC-funded Forum Against the Exclusion of Women.

The forum brings together 17 organizations from across the secular-religious spectrum to counter the exclusion and segregation of women in the public sphere. Forum members are active at the grassroots level and also conduct media, policy, and legal advocacy. A recent case regarding gender segregation in universities that the forum was involved with came before Israel’s Supreme Court, and in July, the court handed down a mixed ruling: It permitted undergraduate classes to be gender-segregated, sending what our flagship project partner Association for Civil Rights in Israel (ACRI) called “a dangerous message that excluding women from public spaces is legitimate,” but it limited segregation to just the classrooms themselves, and stated that the rest of the university campus must remain unsegregated. It also insisted that female faculty should no longer be barred from teaching all-male classes. Brit Yakobi cited this as an example of the way “gender segregation is expanding to new areas. “There are other examples, too,” she said. “Religious leaders have seen to it that state-funded ultra-Orthodox events and buses to ultra-Orthodox areas are segregated and that women are not accepted in elite combat units.”

Troublingly, religiously motivated gender segregation enjoys broad legitimacy. According to an Anti-Defamation League in Israel statistic from 2019, over 50% of Israelis do not oppose it. “We realized that without educating the younger generation, we won’t see the shifts in public opinion necessary to reverse the dangerous trends in gender segregation,” Yakobi said.

This is why the forum has focused on formulating a strategy based around education— a project supported by NIFC over this past year. The forum built out a team of activists and experts, working with the progressive education organization HaMigdalOr (an organization funded by the NIF global network) to develop five teaching curricula on gender equality for high school students and high school graduates in mechinot (pre-military programs). Each focuses on either history of gender inequality, the connection between women’s exclusion and other forms of discrimination against women, exclusion and representation of women in Israel’s public sphere, women’s inclusion in a multicultural society, or leadership of grassroots campaigns.

“We chose to target high school students and mechinot participants, aged 16 to 19, because they are intellectually developed enough to grapple with questions of feminist thought and the politics of exclusion,” Yakobi explained. “Service in the army is often Israeli young people’s first experience of exclusion and segregation. By intervening before students begin military service, we give these young people, particularly women, the tools to identify and combat exclusion during their service.”

The project is currently in the pilot phase. A number of schools and mechinot will teach the curricula in the next academic quarter and, following feedback from both students and teachers, the team will make necessary changes before distributing the materials more widely.

“Over time we plan to reach larger numbers of Israeli young people,” says Yakobi. “We want to give them the tools to identify the exclusion of women as a threat to Israeli society that is unacceptable in a democracy.”