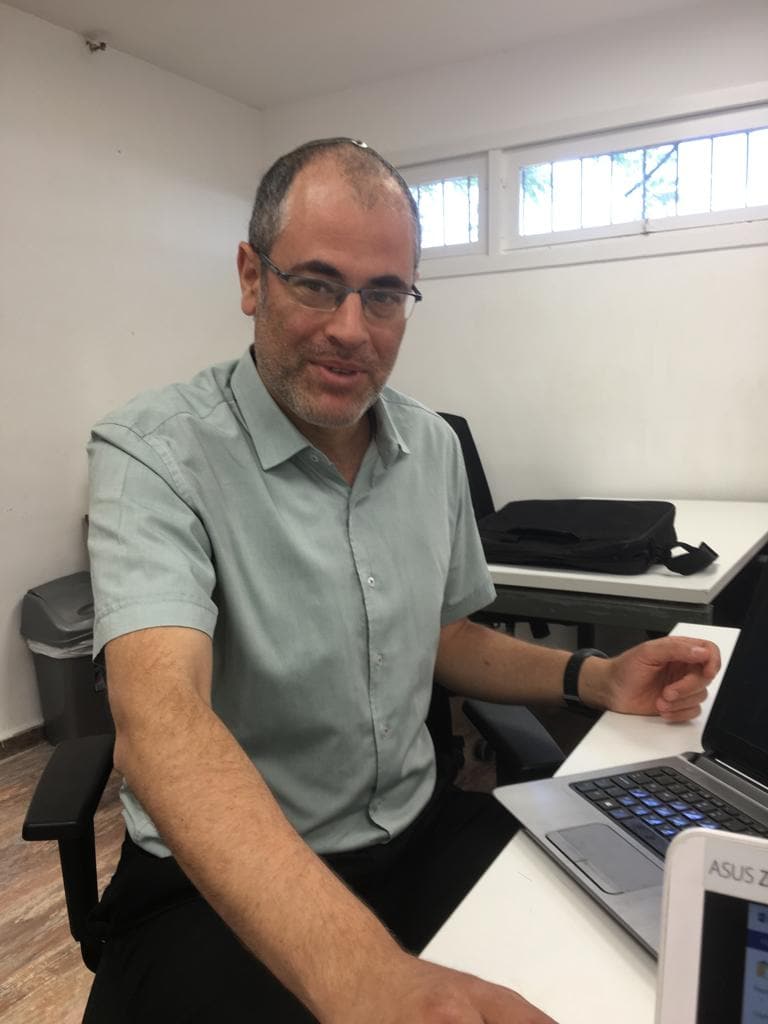 Shmuel Shattach was all set to follow in his banker’s family’s footsteps when Yitzhak Rabin was assassinated. Shmuel was nearing the end of his army service as a commander in the paratroopers and it was time to apply to university.

“The assassination grabbed me and made a switch,” says Shmuel. “I felt I had to go into education and try to make a difference in the religious sector.

Meet four incredible individuals driving some of the New Israel Fund of Canada’s projects this year and fighting for democracy the day after elections. Click here to meet all four.“There is a paradox in the national religious sector in Israel,” says Shmuel, today director of Ne’emanei Torah va’Avodah (Faithful to Torah and Labor,) a movement that fosters a liberal, engaged and modern Orthodoxy. “We educate toward religion and work – preferably in high-status professions like law or science. So who is going to educate the next generation? It falls to those who don’t believe in these ideals. Most of my kids’ teachers are Haredi or National Haredi. There are very few national religious teachers.”

So Shmuel got a BA in education and economics and later a master’s in public administration. He taught in a national religious high school for eight years, rose to the position of vice principal, then spent two years as a B’nai Akiva emissary in Chicago. He intended to continue teaching but when he returned to Israel in 2006, he was recruited to serve as (part-time) director of Ne’emanei Torah va’Avodah, a position made possible by a grant from the New Israel Fund. He accepted the position because he was worried about what was happening in the religious population and wanted to change things on a national level.

“This is a burning need in me,” says Shmuel. “From the beginning of my life, I’ve been trying to fix things, to change things.”

Shmuel was in 10th grade and president of the student council in his religious boarding school when a group of Ethiopian Jews, fresh off the plane during Operation Solomon, arrived at the school. School officials put them in separate dorm rooms but Shmuel fought to have them fully integrated – and succeeded. Asked what motivated him, he answers simply, “It was the right thing to do.”

The following year he was awarded a Ministry of Education prize for excellence in youth activism for organizing volunteers to run summer camps and other activities for Ethiopian immigrant children.

In 1999, Shmuel was studying at the Ma’alei Gilboa Yeshiva and active in Meimad, the progressive religious political movement then part of the Labor party, when Labor’s Ehud Barak won the election for Prime Minister by a landslide.

At home in Givatayim, Shmuel saw everyone around him celebrating but also expressing hostility toward settlers and Haredim.

“I said, OK, we won, but we should have solidarity. We mustn’t put them down.”

With his activist instincts, Shmuel grabbed a stick left over from the family sukkah, spray painted a sign that said ”Maintain restraint and unity” and held it high at the victory rally at Rabin Square.

When he returned to the yeshiva, his fellow students made fun of him, calling him naive.

“I thought, maybe they’re right. You know when you try to change things, people look at you and say, ‘You’re pathetic, why don’t you just shut up?’”

The following Friday, a well-known columnist titled his column in the daily Ma’ariv newspaper with the exact words of Shmuel’s sign, calling on people to celebrate the victory but to maintain restraint and to refrain from developing hatred toward people who disagree with them.

Every time they meet, Shmuel’s father, who had been deputy director of Bank Hapoalim, asks him, “Nu, Shmuel, when are you going to get a job?”

“No, you’re volunteering. This is not a job.”

Shmuel emphasizes that his father’s comments are an expression of the different priorities with which he grew up and is always said with love and understanding.

Shmuel succeeded in reviving a dormant organization to one that is lively, bigger and influential.

“When I started, I was executive director, but in those days I was executive director by myself,” Shmuel jokes. “We had a secretary one day a week and a part-time editor. Since then, we increased our budget tenfold and we have 12 employees working to spread our ideas.” In 2015 and 2017, the daily Yediot Achronot, named him as one of the 50 most influential Israelis.

Shmuel also works to make a difference in his time off. When he moved with his wife and six children to Lod, Shmuel and his wife decided, together with three other families, to send their daughter to the only mixed gender religious school in the city, which was educationally excellent. Other religious families were staying away because the student body was made up primarily of disadvantaged Ethiopian-Israelis. On her first day of school, his daughter was one of two white children in her class. Some family members accused him of sacrificing his daughter because of his job. But the next year, they succeeded in recruiting 19 other native Israeli families. The following year, the school went from one first grade to three, and the year after to four. This year, all the spots filled up the day registration opened.

Ne’emanei Torah va’Avodah was founded 40 years ago by Dr. Yechezkel Cohen, a liberal Orthodox thinker, lecturer in Jewish studies and author, in response to what he regarded as worrisome, even dangerous trends such as separation of the sexes, a reduction of secular studies in national religious schools, and increasing alienation between different sectors of the population. He wanted to return the national religious populace to the movement’s roots and original principles. Cohen fought for secular education in the religious sector; army recruitment of yeshiva students; social justice and the integration of women in religious and public life.

Like Cohen, Shmuel fears for Israel’s future. “During the Second Temple period, most of the population was normative but they were led by zealots. If we’re not careful, that could happen again – and the State will fall apart. What we’re trying to do is give a platform and a voice to the moderate center, to strengthen the majority. Most people are good, but the fringes influence them.

“We, the people in the center from all the sectors, can live together very well. But the media empowers the fringes,” he says. “They give people like MK Bezalel Smotrich a lot of power and it’s the same in the Arab and Haredi sectors. It’s the fringes that are my adversaries.”

Shmuel derives hope from his belief that most people are good and that working quietly and behind the scenes, NTA has achieved important changes. And NIF gives him hope.

“What’s great about NIF is that it’s made up of people who have a real, straight, honest drive to make things better. It gives you hope.”