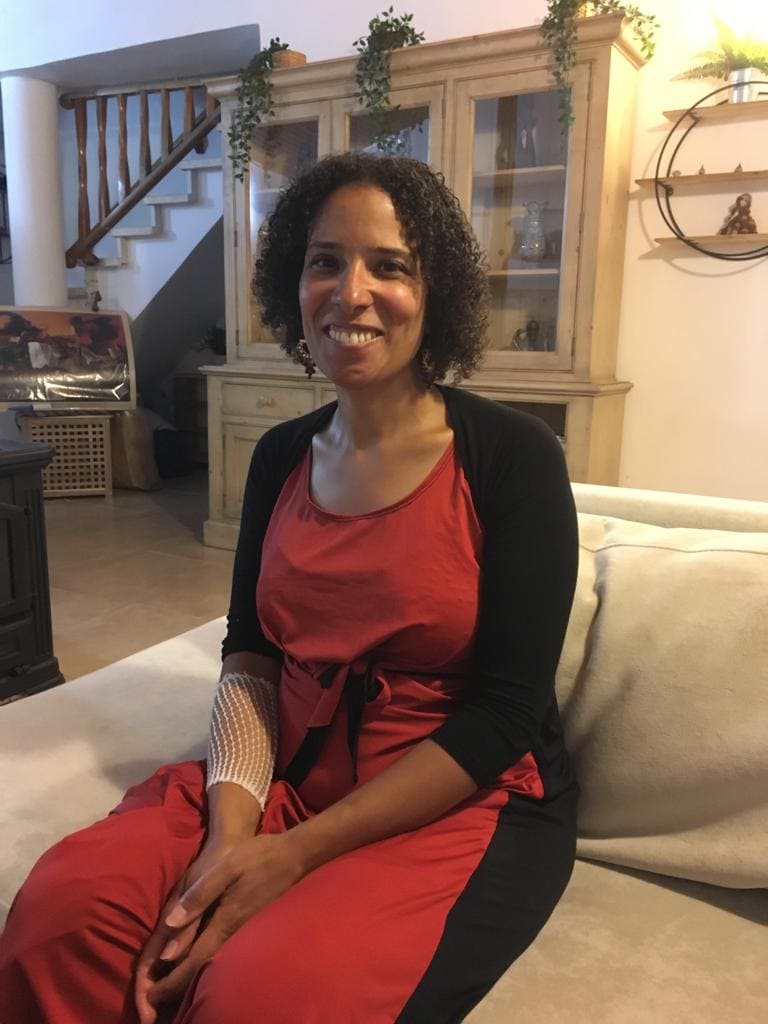 Dr. Mushira Aboo Dia, 40, is an Israeli Palestinian whose Hebrew is better than her Arabic. Five of her of 14 siblings converted to Judaism and six of them served in the IDF. That may sound unusual to you and me, but to Mushira it’s the natural outcome of growing up in Jewish schools and neighbourhoods. She and her siblings lit Chanukah candles, dressed up for Purim and welcomed the Sabbath Queen at school, like all the other kids. Mushira considered serving in the army herself.

“It’s not easy to straddle the fence your whole life, being neither here nor there, knowing that I never really belonged to any group. I can understand their [her siblings’] choice,” Mushira told Haaretz in February.

Meet four incredible individuals driving some of the New Israel Fund of Canada’s projects this year and fighting for democracy the day after elections. Click here to meet all four.Mushira’s mother, who was illiterate, insisted that her children attend good schools, even if that meant working as a cleaner in a hospital to support them after her divorce. The irony is not lost on the senior physician who now works in a hospital herself.

Mushira, her parents and three of her siblings lived in one room in her grandparent’s apartment. “We grew up poor but our mother taught us that money wasn’t important. What was important was who you are. She taught us to be good, straight, honest people.”

Mushira was always a straight-A student. And she was always bothered by injustice.
When asked how she would describe herself, she thinks only for a moment before saying, “A fighter for justice.”

In high school, Mushira was drawn to biology and chemistry and decided medicine would be a good way to integrate science with helping people. And that she has done plenty of.

An obstetrician-gynecologist, she has been volunteering with Physicians for Human Rights-Israel (PHRI) for 15 years, providing medical services in the occupied territories in a weekly clinic, monthly women’s medical days and volunteering in the organization’s open clinic in Jaffa for asylum seekers and others without status or medical insurance. In addition to her job at Hadassah and her intensive volunteer work with PHRI, Mushira works with high-risk patients at a clinic in Bet Shemesh, outside of Jerusalem. The night we meet in her beautiful Ein Kerem apartment, she’s on call for the hospital’s acute sexual assault treatment center.

Mushira served on the board of PHRI for seven years and has been chair for four – with a year’s break during which she earned an MA in public administration as a Wexner fellow at Harvard’s Kennedy School of Government. She considers that the best year of her life – so far.
She is the first woman – and the first Palestinian-Israeli – to chair PHRI’s board.

Mushira always thought she would go into pediatrics, but loved her OB-GYN rotation in med school and went into it partly because she felt it was strange that most of the doctors in a field that deals with women are men. After working her way through the Hebrew University Hadassah Medical School and completing her internship at Hadassah Medical Center, she was immediately hired by the hospital.

Mushira remembers feeling passionate about equality and justice as a little girl, and injustice and inequality still rankle her. But she says she grew up with “zero political consciousness.” As chair of the medical school’s student union, she brought the CEO of Physicians for Human Rights Israel to speak to the student body – and got into trouble with the apolitical Student Union for bringing in a political speaker. But she remembered the speech and three years later, when she graduated, she contacted PHRI and began volunteering in their mobile clinics, setting out for a different Palestinian village every Saturday.

“My first time over the border, I felt I was in a different world,” Mushira recalls. “You don’t realize the suffering of the people in the territories until you see it up close. There is such a lack of resources. These people might live next to a settlement whose residents have all the services and rights – and they have none. In one village, our makeshift ‘clinic’ was in a tiny structure covered with asbestos. In was the Jordan Valley in summer, where temperatures can rise to more than 100 degrees and there wasn’t even a fan. None of the villages have clinics – we usually set up in a school, divide the rooms and start working.

“This is my political activism,” she says. “As a doctor, this is my way of contributing.”

In May, a five-year-old Gaza girl had to be accompanied by a stranger to an East Jerusalem hospital where she underwent urgent brain surgery to remove a tumor. The Israeli authorities had said it would take days or weeks to clear one of her parents or another relative for the trip, but the girl did not have days. Her life was at stake. Doctors said that in these circumstances, it would be difficult for her to fight for her life and indeed, she was sent back to Gaza in a coma to die. Mushira maintains her calm as she talks about this girl, but one can tell by the timbre of her voice that she is outraged and pained.

Her Facebook post about the girl received some disturbing comments. “People here would never let that happen to their child, yet because she is ‘the enemy’ they don’t feel compassion for her,” says Mushira. “They don’t see the other side. There’s barely any people-to-people interaction. People’s lives here are too comfortable and convenient so they don’t really care. One of the results of the occupation is that Israelis have lost the ability to feel compassion for the other side, and that is sad – and scary.

“PHRI tries to show people that the occupation can’t last forever. Common sense says it is wrong. At some point it has to end…We have to reinvent ourselves in thinking about a solution to the occupation,” she says. “But I don’t see a practical solution.

“Still I’m sure it will end. But I’m not sure it will end in my lifetime.” PHRI, she says, tries to defy “the occupation and its wrongdoings not only with its humanitarian work but also with its advocacy with the government and in raising people’s awareness of the realities of the occupation.”

Despite everything, Mushira is an optimist. “I still believe that eventually things will change – that people who want to lead the change toward a more just and equal society will take the reins. I’m surrounded by good people in PHRI and that gives me hope.”

The fact that she sometimes gets negative responses to her work with PHRI doesn’t deter Mushira. “We need to stay true to our own inner truth and not feel that we have to do what the majority thinks if we think otherwise. In my personal and professional life, it has always been important for me not to lose my way, even when those around me disagree or don’t think as I do. That’s what my mother taught us and that’s what I’m doing. This conviction helps me overcome any adversity I face. But I feel it’s important to also listen to those who disagree with me and to maintain respect for them.”