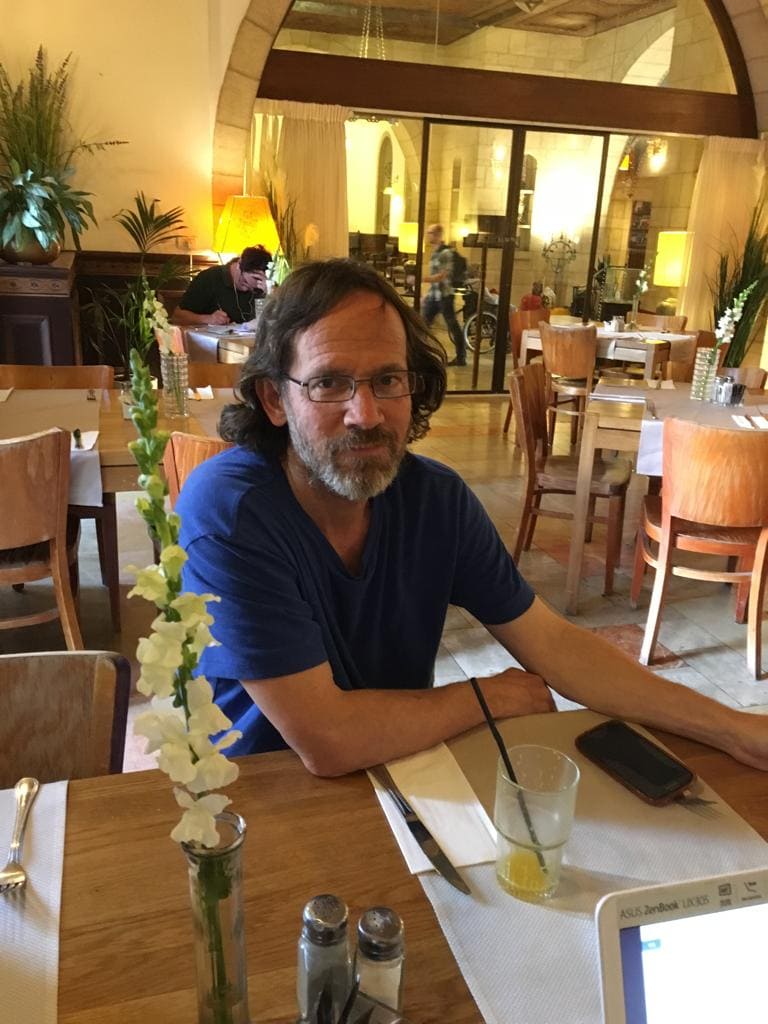 “The most important thing Israelis can do is to not accept the oppression.”

Aviv Tatarsky is a nonviolent warrior. A veteran martial arts instructor, he fights with all his might for a better, more peaceful future for Israelis and Palestinians. But he won’t lift a finger against an opponent – even to defend himself. His daily meditation practice gives him the strength to keep going in the face of overwhelming odds.

Meet four incredible individuals driving some of the New Israel Fund of Canada’s projects this year and fighting for democracy the day after elections. Click here to meet all four.In his job as a researcher at Ir Amim, an NGO that works toward “an equitable and stable Jerusalem with an agreed political future,” Aviv helps East Jerusalem Palestinians fight home demolitions and property takeovers; regularly visits the Temple Mount/Haram al-Sharif; lobbies with local and national officials; and raises awareness among Jewish Israelis about the repercussions of Israeli policy on the daily lives of Palestinians and Israelis in Jerusalem.
Still long-haired and youthful looking at 47, Aviv is passionate about his work.

“Jerusalem is the only binational Palestinian-Israeli city in the world,” he points out. “My work with Ir Amim gives me the opportunity to know East Jerusalem and the way the Israeli authorities work there from very close up. It’s a good combination of policy and field work, connection with people and analysis and strategy. We’re involved in the most important struggle there is right now – against the occupation and for democracy, justice and human rights.”

Aviv has a Master’s degree in math, and before reaching Ir Amim, he earned his living by giving Shiatsu sessions in addition to teaching the martial art, kitaido.

“The combination of meditation, martial arts and activism got me very interested in nonviolent struggle,” he says.

Aviv grew up in a secular family in Haifa. He traces the roots of his activism to his father’s involvement in the settler movement and in the Likud. Despite being on opposite sides of the political spectrum, father and son remain friends.

Asked to describe himself, Aviv says he has a good sense of humor; is cynical but in a loving way and is individualistic. And then he launches into his Israeli-ness.

“I have no other home,” he says. “I live today in a state of Israel that has a lot of power that is a result of its people’s abilities and virtues. And we use our power to ruin the lives of millions of people. I can’t accept that.”

Outside of work, Aviv engages in nonviolent resistance and direct actions with Palestinians. This got him arrested on more than one occasion.

He made the news in 2014 when, during the first Gaza war, he and his friends organized groups of Jewish Israelis to protect Palestinians who were being attacked in the streets of Jerusalem. The day after a terror attack in which one Israeli was murdered, a group of far-right Israelis began attacking the Jerusalem light rail train and a dozen of them boarded. Aviv followed. He proceeded to take down the racist stickers they were putting up on the train windows. Then they turned on him and began hitting him.

“I could have gotten off,” says Aviv, ”but I decided to stand up to them.” Aviv’s martial arts and meditation practice helps him keep “a cool and centered mind and not get carried away with hostility” toward his attackers. The train stopped at a station and security guards boarded and asked Aviv to get off, saying they would protect him. “I told them, I don’t need your protection. You’re security. You should take care of them [the inciters].” Eventually, the police arrived and the group ran away. The scene was videotaped and Aviv filed a complaint with the names of several of his attackers but the police did nothing, he says.

“The police protect the Israeli right. If they didn’t, we wouldn’t have to intervene when Palestinians are attacked,” says Aviv. “The police just stand by – or they turn on the Palestinians and not on the attackers.”

Don’t you get mad?

Aviv looks into the middle distance. “My dominant emotion is sadness…I see how Israeli policies are ruining the lives of many Palestinians, some of whom are long-time friends. For one it may the uprooting of his 200 olive trees and the destruction of his source of livelihood, for another, it’s being tortured in jail. Things like that.”

Being so involved in an uphill battle to correct injustice can be depressing. Can you still have fun?
“It’s not always easy. I try to take care of myself by meditating, running, reading and writing. And my amazing partner makes sure I keep smiling. But I guess like many activists, I’m scarred.”

So you don’t have fun?

“No, I have fun. But maybe I used to be happier in the past.”