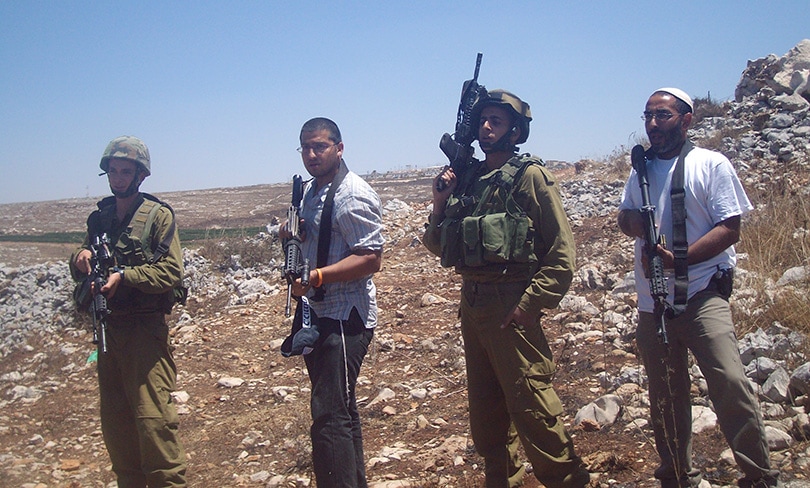 A new report by NIFC project partner B’Tselem: The Israel Information Center for Human Rights in the Occupied Territories documents how Israeli settlers have taken over large sections of land in the West Bank with the assistance of the IDF.

The report entitled “State Business: Israel’s misappropriation of land in the West Bank through settler violence,” states that there are 280 West Bank settlements with 440,000 settlers. This number includes 150 outposts that are not recognized by the state. About one third of these outposts were erected in the past decade and are often referred to as “farms.” These “farms,” which are at the forefront of settlers’ violent efforts to seize land, are defended by the IDF and receive financial support from the government in the form of paved roads, water, and electric infrastructure, B’Tselem reports.

In total, these “farms” have blocked Palestinians from accessing 5,250 acres of their agricultural land. Four “farms” block 4,750 acres. “Uri’s Farm” in the Umm Zuqa national reserve (in the northern Jordan Valley) alone blocks 3,500 acres of land.

The B’Tselem report says that “Israel has taken over some of these areas using official means: issuing military orders, declaring the area ‘state land,’ a ‘firing zone’ or a ‘nature reserve’, and expropriating land. Other areas have been effectively taken over by settlers through daily acts of violence, including attacks on Palestinians and their property.

“The two tracks appear unrelated: The state takes over land openly, using official methods sanctioned by legal advisors and judges, while the settlers, who are also interested in taking over land to further their agenda, initiate violence against Palestinians for their own reasons. Yet in truth, there is one track: Settler violence against Palestinians serves as a major informal tool for the state to take over more and more West Bank land. The state fully supports and assists these acts of violence, and its agents sometimes participate in them directly. As such, settler violence is a form of government policy, aided and abetted by official state authorities with their active participation.”

Settlers on these farms not only block access to land but also behave with systematic violence towards Palestinian villagers: uprooting trees, disrupting harvests, damaging property and injuring villagers through stone throwing. The report includes 20 eyewitness reports of violence by settlers against Palestinian villagers.