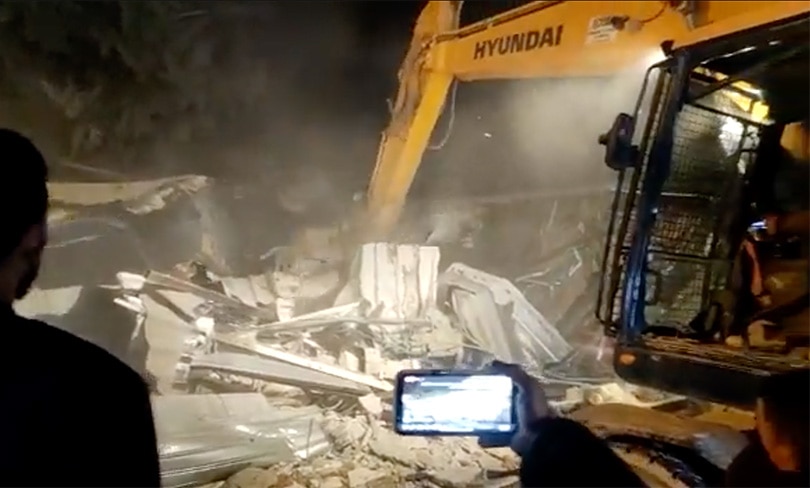 Early in the morning on January 19th, hundreds of police officers surrounded the Salhiya family home in the Sheikh Jarrah neighbourhood of East Jerusalem. They entered and arrested two dozen family members, expelled the rest, and proceeded to demolish the home. On a rainy night with near-freezing temperatures, the demolition left the Salhiya family homeless.

A number of NIFC partners have been active in opposing harmful government actions in East Jerusalem. Past partner Ir Amim has been at the forefront in advocating for an end to a broad swath of unjust policies in East Jerusalem. Ir Amim, along with other organizations and activists, were at the Salhiya home in the early hours of Wednesday morning documenting the disgraceful demolition. Yesterday, a group of organizations including NIFC project partner Breaking the Silence, as well as Peace Now and Omdim Beyachad (Standing Together), organized protests outside the homes of government leaders responsible for the demolitions.

NIFC’s partners will continue this crucial work to build a just and equitable Jerusalem for all its residents.

🚨BREAKING🚨
It's 4am in Jerusalem.
Over 100 police officers descended upon the Salhiyyeh family home, forcibly removing the family and activists who were there.
The electricity to the area was cut off.
Family members and activists were arrested.
The area is now blocked off. pic.twitter.com/0O5q951BxW

1/ After forcefully evicting the Salhiye family in freezing temperatures overnight, the Israeli authorities proceeded to raze their homes and all remaining structures on their property. Uprooted from Ein Kerem in 1948, they have now been displaced & left homeless for a 2nd time. pic.twitter.com/QdJdxnJX2b

It is cold and raining in Jerusalem today, but @OmdimBeyachad said that they are “Still protesting in Jerusalem. Starting soon in Tel Aviv, at 10 Hapardes Street., come! Enough of displacement. Stop the occupation. Justice for the Salhiya family.”/8https://t.co/zAYisKV7sn

From Jerusalem to Tel Aviv Israelis and Palestinians are making their voices heard: “Now in Tel Aviv. Freedom for Sheikh Jarrah. #SaveSheikhJarrah” /9https://t.co/oqXa9spf3J