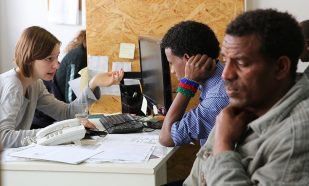 Katz has halted the funding because he is concerned that government money is being used to assist asylum seekers and refugees, which, according to him, would be “against government values.” In his attack on assistance for asylum seekers and refugees, Katz has halted the a broad range of social service funding which also provided assistance to Holocaust survivors, victims of rape and sexual assault, and the homeless population, among others.

These welfare recipients including refugees, asylum seekers, migrants and other “non-Jewish foreigners” are all sectors of Israeli society that the New Israel Fund global network is proud to support and will continue to support during the COVID-19 crisis.