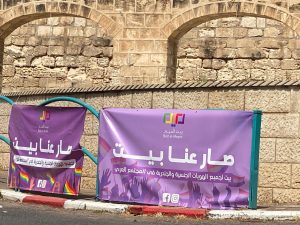 To mark Pride Month in Israel, the Arab LGBTQ organization, Beit el-Meem has launched the first-ever campaign for LGBTQ rights in Arab towns around Israel including in Nazareth, Iksal, Kafr Kanna, and Reineh. Beit el-Meem was established earlier this year following an NIF emergency grant to The Aguda Israel’s LGBT Task Force.

Beit el-Meem placed large signs and banners around these Arab towns that proudly declared in Arabic, “We have a home for all sexual and gender identities in Arab society. The gay and lesbian activists of Beit el-Meem are making their voices heard to secure space for the LGBTQ Arab community. It belongs to all of us.”

When it first launched this most recent campaign, Beit el-Meem noted that while “the LGBTQ Arab community has lived in secret in the past, today our community is starting to organize, as it deserves, to promote the right to equality and security that we are all owed.”

The campaign is part of a broader program to build LGBTQ support infrastructure in Arab Israeli villages and towns. This would include the already-functional, free LGBTQ hotline in Arabic that offers emotional support as well as further counseling services, legal assistance in cases of violence and incitement, and social events and meetings to Arabic-speaking LGBTQ people.