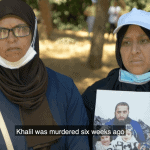 Bereaved Arab Israeli mothers marched to the National Police Headquarters in Jerusalem earlier this month to protest growing violence in Arab Israeli society and to demand that the government and the Israeli Police form a plan of action to tackle the problem and “prevent the next murder.”

The march, which began in Haifa, was led by Muna Halil, whose 28-year-old son Halil Halil was shot dead two months ago near his home in the city. She was joined along the route by other bereaved mothers. Controversially, the man charged with killing Halil Halil has only been indicted for misuse of weapons rather than murder.

Muna Halil and others blame the authorities for not working resolutely enough to prevent the killings and adequately punish the perpetrators. This is the result of racist attitudes among the police, who neglect crime in Arab communities because they view Arab citizens as threats, not as civilians that they are duty-bound to protect.

Halil said, “A boy is killed in front of everybody and the entire neighbourhood knows who was involved and the police look away.”

Rada Jabber, a lawyer with an organization called Aman: For a Safe Arab Society, said, “This march is very important because we are taking social responsibility for violence and crime through a first-ever protest by bereaved mothers. I hope this protest will be a turning point in the attitude of the government and authorities to this phenomenon.”

According to Aman, violent crime in within Arab Israeli communities has claimed the lives of 89 Arab Israelis in 2019 and 58 have been murdered so far this year.