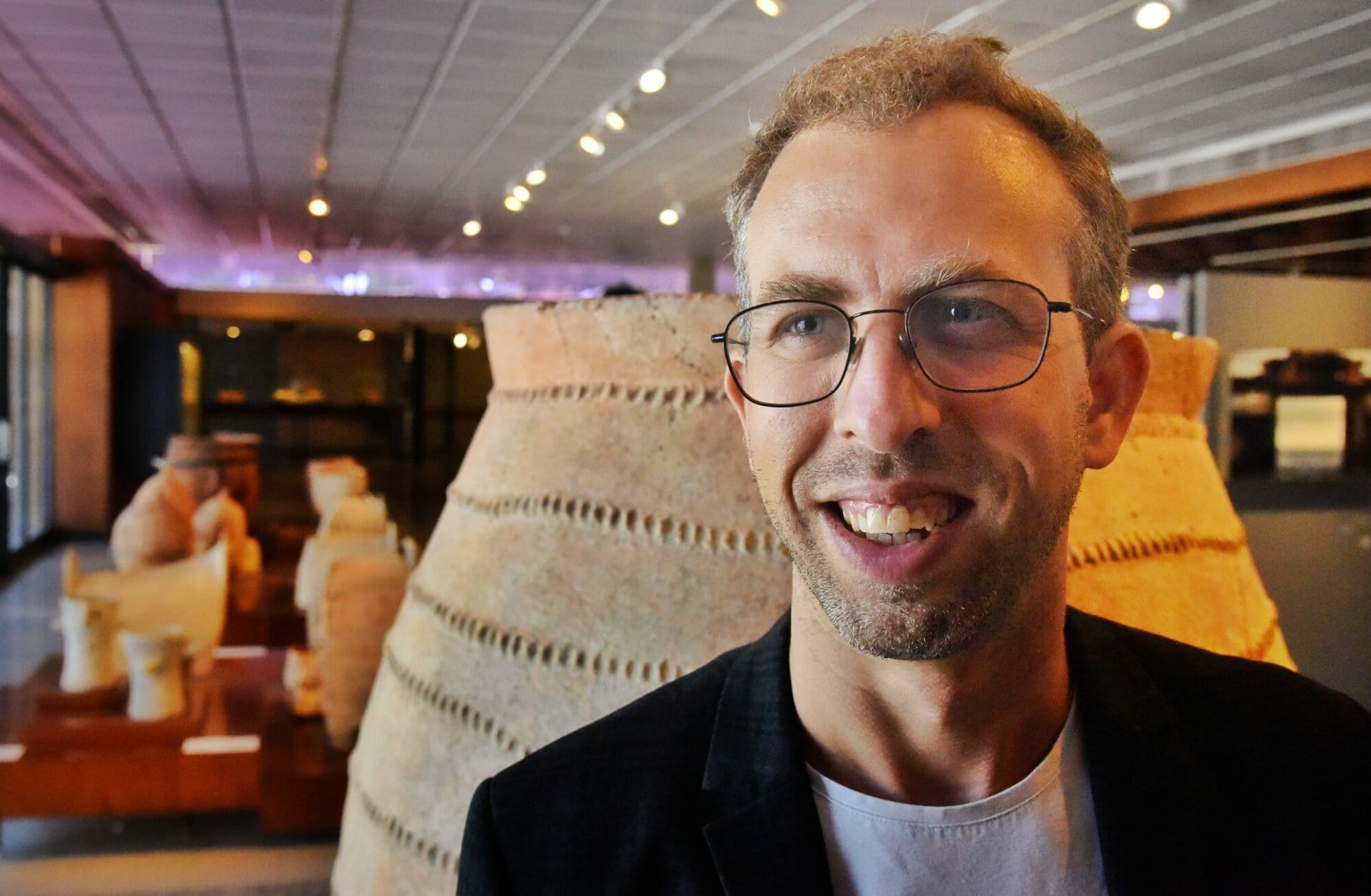 NIFC caught up with Alon Arad at Tel Aviv University, where he was about to meet with archaeologists.  This meeting was part of his unending effort to expose archaeology professionals and others to Emek Shaveh’s point of view that the heritage of all of Israel’s communities be respected and that archaeological sites be used to connect—rather than separate—peoples.

“I believe in dialogue,” he says. “I don’t always come to convince. We don’t have to agree, but let’s talk about how we see things.”

What is Alon working on now?

Alon and Emek Shaveh have to fight for their principles and fight they do. They recently went to Israel’s High Court of Justice to try to get the Ministry of Jerusalem and Heritage – which preserves only Jewish and Zionist heritage – to also fund work on the heritage of other local cultures.

“We argued that the Ministry, as a government office, needs to fund the preservation and presentation of all cultures,” Alon says.

“This is how institutionalized the discriminatory policies against non-Jewish heritage are,” says Alon. “Heritage is all political.”

Another current battle Emek Shaveh is waging is against the takeover by extreme right-wing NGO, Elad, of the Biblical era Hinom Valley, near the Old City walls. Elad is notorious for purchasing homes of Palestinians in East Jerusalem in an attempt to Judaize the area. In the mid-1990s, Israel’s Nature and Parks Authority let Elad take over the management of the nearby City of David and turn it into a kind of Biblical-archaeological theme park.

“Elad keeps expanding and they’ve recently expanded into the Hinom Valley and other areas. We are in a huge fight against them to prevent another layer of justification or approval by the mainstream Israeli public that the heritage of this area is only theirs (which assumes ownership). They are planning rock concerts there – this is our fight,” Alon says. Emek Shaveh has managed to focus media attention on the issue and to increase the discourse about it. They’ve succeeded in slowing down and in some cases, stopping Elad’s work there.

In addition to fighting battles in court and in the court of public opinion, Alon spends part of his time in the office, where he works with his staff on position papers for Knesset members and other decision makers, social media posts, diplomatic briefings, meetings with colleagues and with archaeology students from around the world who, he says, are important because they are the next generation of professionals creating the body of knowledge about what is happening in Israel. The other days are field days, which are the most fun for him, in which he gives tours of archaeological and heritage sites, and visits sites being developed, all with an eye to making everyone’s heritage visible and accessible.

What are his goals for the future of Emek Shaveh?

He’d like to see more attention and respect paid to non-Jewish heritage in Israel which, he believes, “will get people to be less intimidated by terms like peace and coexistence. They’ll be able to see that, OK, this is a piece of land of two peoples, both claiming the whole area. Once we can disconnect heritage from ownership and embrace the fact many people have lived in this land, it will be much easier to have real coexistence here. This applies to where and how much we do archaeology but it’s also about educational programs that would teach high school students that after the Jews were expelled in the second century CE (as well as before), other people travelled, lived, settled here and did amazing things.”

If he had additional funds, Alon would create a research unit within Emek Shaveh in order to make faster progress on a big database the organization is creating. The databasewill include all heritage and archaeological sites in Israel/Palestine, excavations, budgets, and preservations in order to take the organization to a more strategic, rather than a case-by-case level, and to be able to use data to educate policy-makers.

“The world is shifting from moral- or hunch-based decision making to data-driven decision making,” he says. “We’re in the middle of the data revolution. Such a database will also help us approach younger audiences who are influenced by data, as well as huge communities we don’t engage with at the moment, like high tech workers. Data makes our arguments stronger.”

Alon says he feels blessed by the great allies Emek Shaveh has in its struggle, including archaeologists in the Israeli and international communities, other Israeli human rights and peace organizations, and some European governments.

“NIFC is a great ally,” says Alon. “I don’t see them only as our funders; they are our partners, our friends, people we consult with; our supporters and not just financially.”

Read Part One of Alon’s profile