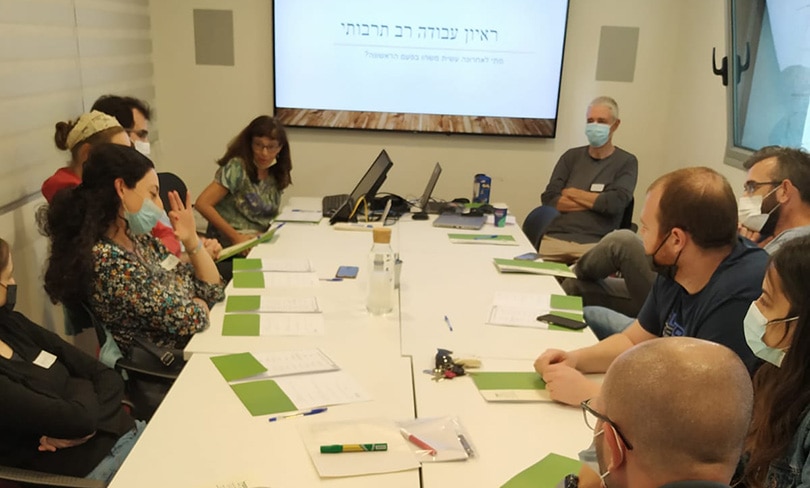 “When was the last time you stepped out of your comfort zone?” Shatil organizational consultant Inda Kriksunov asked a group of middle-management executives. The managers Krinksunov was speaking to were participating in a simulation workshop to develop adaptive interviewing skills in order to hire a more diverse staff.

“The process has been fascinating,” Kriksunov said. “At the beginning of the simulation, across the board, everyone is convinced they don’t have biases, and by the end of the day, they are dismayed by the preconceived notions they’ve discovered. And what happens is that in an effort to be politically correct, the hiring manager often ends up knowing very little about interviewees from different social groups.”

For example, following a role-playing interview with a candidate, an ultra-orthodox Jewish woman engineer with two young children, the interviewer was dubious about hiring a reserved young mother with no professional experience. When other simulation participants noted the candidate had completed her studies with excellence at a prestigious religious college, the interviewer changed her mind.

Kriksunov has also observed basic similarities between candidates from the ultra-orthodox and Palestinian communities in Israel: “They both come from cultures that place a high value on modesty and group affiliation, and tend to be self-effacing in their interviews.” One of the skills managers learned through the simulations was how to elicit information from interviewees indirectly. For example, by asking them to describe an academic success, or by first sharing their own strengths and weaknesses.

Shatil’s “Diversity in the Workplace” project began in 2018 when Shatil discovered that even local companies interested in employing a diverse staff, in fact, tend to hire very few minority-group employees. Shatil established a forum of twenty experts on “shared society” from various fields — academia, government, and civil society — who developed a model for intervention to increase workplace diversity. They called this model “Puzzle”.

The Puzzle model is made up of four complementary dimensions: employee recruitment, corporate culture, policy-making, and community. Each dimension includes a diagnostic survey that guides managers in identifying elements of diversity that they wish to change or strengthen in their organizations, as well as tools and professional literature from the field for each of the areas. The Puzzle website offers a slew of resources as well— examples of diversity in movies, books, music, and podcasts. On December 20th, 2021 Shatil will hold an inter-sectoral conference to present the Puzzle model and will release its new resource book on the topic with articles on diversity, research from the field, and interviews with a variety of professionals promoting diversity.

Meanwhile, changes continue to advance at the software design company. An extensive consulting process with Shatil has helped managers tweak their recruitment procedures. For example, managers stopped administering a recruitment test that had been found to be culturally biased, and removed certain criteria for acceptance that had been too narrowly defined. According to Kriksunov, company executives are finding the simulations to be a significant component of this process. As one participant put it, “There’s nothing like walking in another person’s shoes to know how they think and feel.”