A Fund to Fight the Occupation: Announcing the Boritz-Fromstein Fund for Human Rights 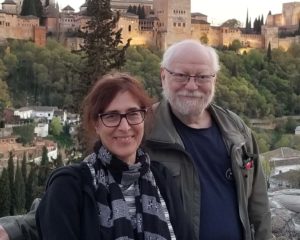 NIFC is proud to announce the creation of the Boritz-Fromstein Fund for Human Rights, a $250,000 endowment started by long-time supporters Efrim Boritz and Naomi Fromstein that is dedicated to supporting Israeli human rights NGOs working to end Israel’s occupation.

For our readers’ benefit, when did you first become supporters of NIFC and why did you choose to get involved?

We’ve both been long-time supporters of NIF. Its mission, vision and work on the ground in Israel inspired us from its earliest days as an alternative to mainstream fundraising organizations. However, our involvement was somewhat passive and limited. For Naomi, this began to change when she attended “Succah by the Water” which highlighted NIF’s work on women’s issues in Israel. For me [Efrim], it changed after we participated in a NIF study tour which connected us to NIF projects and ground staff in Israel. Their dedication to causes we believe in moved us deeply and motivated us to get more personally involved than we had been until then.

What is the Boritz-Fromstein Fund for Human Rights? Why did you feel the need to start it?

The fund aims to support NIF’s projects in Israel that seek to address the injustices imposed on the Palestinian community arising from Israel’s occupation of the West Bank, including poverty, lack of education, lack of public services, and abuses of human rights. We believe in the importance of ending Israel’s occupation of the West Bank, and thereby helping to resolve the conflict between Israelis and Palestinians so that they can each live in peace, security, and dignity. There wasn’t a fund that addressed these issues directly and publicly. It is encouraging that other donors have also recently chosen to support efforts to end the occupation.

What message do you want this endowment to send to other Canadians and to Israelis?

We cannot stand by or be silent when we see the injustices heaped upon the Palestinians. We, of all people, should know better and behave better.

What experiences led you to make this issue such a priority?

One of the most moving and jolting experiences we had was a visit to Hebron led by NIF grantee “Breaking the Silence.” We were shocked to witness the brutality of the occupation. We saw guard towers and barbed wire that prevented the Palestinian residents from even walking on the streets of their own neighbourhood. We saw an Israeli soldier push around a Palestinian teenager with no provocation. It was as if we were transported to Europe during WW2 and were reliving the cruelty and inhumanity that our families experienced. It shook us deeply. In fact, our whole group was in tears as a result of this experience. Almost 10 years later it still haunts us.

Other than this one, what issues in Israel do you also care a lot about?

Most of the issues we care about relate to social justice – we care deeply about the injustices faced by Palestinian citizens of Israel, including poverty, lack of education, lack of public services, racism and abuses of human rights. Having met Palestinians both in the occupied territories and in Israel we cannot bear to continually witness the inhumane treatment of these fellow human beings.

What or who inspires you to believe that our philanthropy from here can indeed make a difference on the ground in Israel?

NIF and other NGO staff and volunteers in Israel working at the grassroots level inspired us to increase our commitments to NIF and continue to do so. By participating in protests and demonstrations in Israel against land grabs and expulsions of asylum seekers we learned that these actions could make a difference.

Certainly one day the occupation will end. What will this endowment do after that day?

We’re glad that you used the word “certainly”. Let’s hope so! In the event of an end to Israel’s occupation of the West Bank, the endowment will support projects/activities that address the injustices faced by Palestinian citizens of Israel, including poverty, lack of education, lack of public services, and abuses of human rights.

This is not an easy issue to work on, here in Canada or there in Israel and the occupied territories. What do you say to others who also care but are nervous to be more outspoken about their views?

Canada is one of the best countries in the world and we live with privileges that are denied to millions, maybe billions, of people around the world. Why should we accept injustices in Israel that we would never accept in Canada? Speaking out against injustice is the least we can do to recognize the plight of others and to inspire actions aimed at securing equal opportunity, inclusiveness, freedom and dignity for those who are denied them.

We learned in the 2018 Survey of Jews in Canada that a lot more people agree with us than we had thought. A quarter of Canadian Jews believe settlements are illegal; 39% of us believe settlements hurt Israel’s security (triple the number of those who don’t), and half of us don’t believe the Israeli government is sincere about making peace. And among young Jews, those percentages are twice as high. Did this come as a surprise to you? What do you think that implies about Canadian Jewry and this issue in the coming years?

These findings are both surprising and very encouraging. There was a time, not that long ago, when progressive Jews feared that they would be ostracized by the larger community with its more conservative views if they were too outspoken. This fear may have suppressed progressive actions in support of causes such as women’s rights, religious pluralism, civil rights and social justice. Now it is clear that we in the progressive camp are not a tiny minority of Canadian Jewry and that our causes have wide support. Educating the broader community about the issues of the greatest importance and need for action in Israel can resonate and have an impact.

How do you recommend that other progressive Canadian Jews educate themselves about the issue?

One of the best ways is to go on a NIF study tour. If that isn’t possible, then participating in the various events that bring knowledgeable speakers to share their insights with us is very worthwhile. Also, interacting with visiting NIF grantees, supporters and staff is a good way to become better informed.

What do you hope will be the involvement of your family and community in the work of this endowment?

We hope to inspire our family and community to maintain and actively support this fund in pursuit of social justice in Israel.